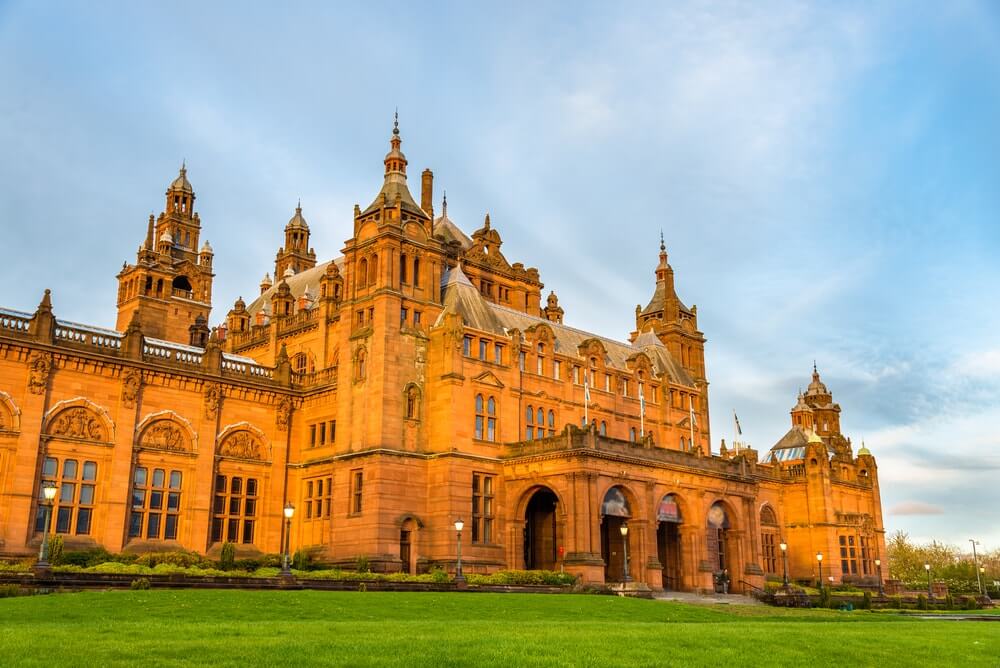 Byres Road stretches 600m from Great Western Road at the Botanic Gardens in the north to Dumbarton Road at Partick Cross in the south. It is a mixed commercial, shopping and upmarket residential area consisting largely of traditional sandstone tenements with retail premises on the ground floor and residential flats above. Its proximity to the University of Glasgow has meant that the surrounding West End of Glasgow is very bohemian, with a mix of professionals living in nearby town-houses and tenements mixed with a large student, academic and artistic population.

Byres Road stretches 600m from Great Western Road at the Botanic Gardens in the north to Dumbarton Road at Partick Cross in the south. It is a mixed commercial, shopping and upmarket residential area consisting largely of traditional sandstone tenements with retail premises on the ground floor and residential flats above. Its proximity to the University of Glasgow has meant that the surrounding West End of Glasgow is very bohemian, with a mix of professionals living in nearby townhouses and tenements mixed with a large student, academic and artistic population.

At the top end (nearest the Botanical Gardens) is the Òran Mór. Formerly Kelvinside Parish Church, Òran Mór, (Gaelic for ‘great melody of life’ or ‘big song’), it has been converted into an amazing space - the artistry involved in creating this place is astounding and will take your breath away - now a thriving arts & entertainment venue in the heart of Glasgow’s West End. Famed for its bars (especially the extraordinary whisky bar on the ground floor) and restaurants, it also offers ‘A Play, A Pie and A Pint’ lunchtime theatre, providing an entertaining 45 minute play with a light lunch. Depending on the time of day, this can be an entertaining pitstop, prior to crossing Great Western Road to see….

Glasgow's Botanic Gardens are located in the heart of the West End and they are ever popular among locals, come rain or shine. Kibble Palace is particularly favoured by young families with children who enjoy playing hide-and-seek behind plants and running around the indoor pond. 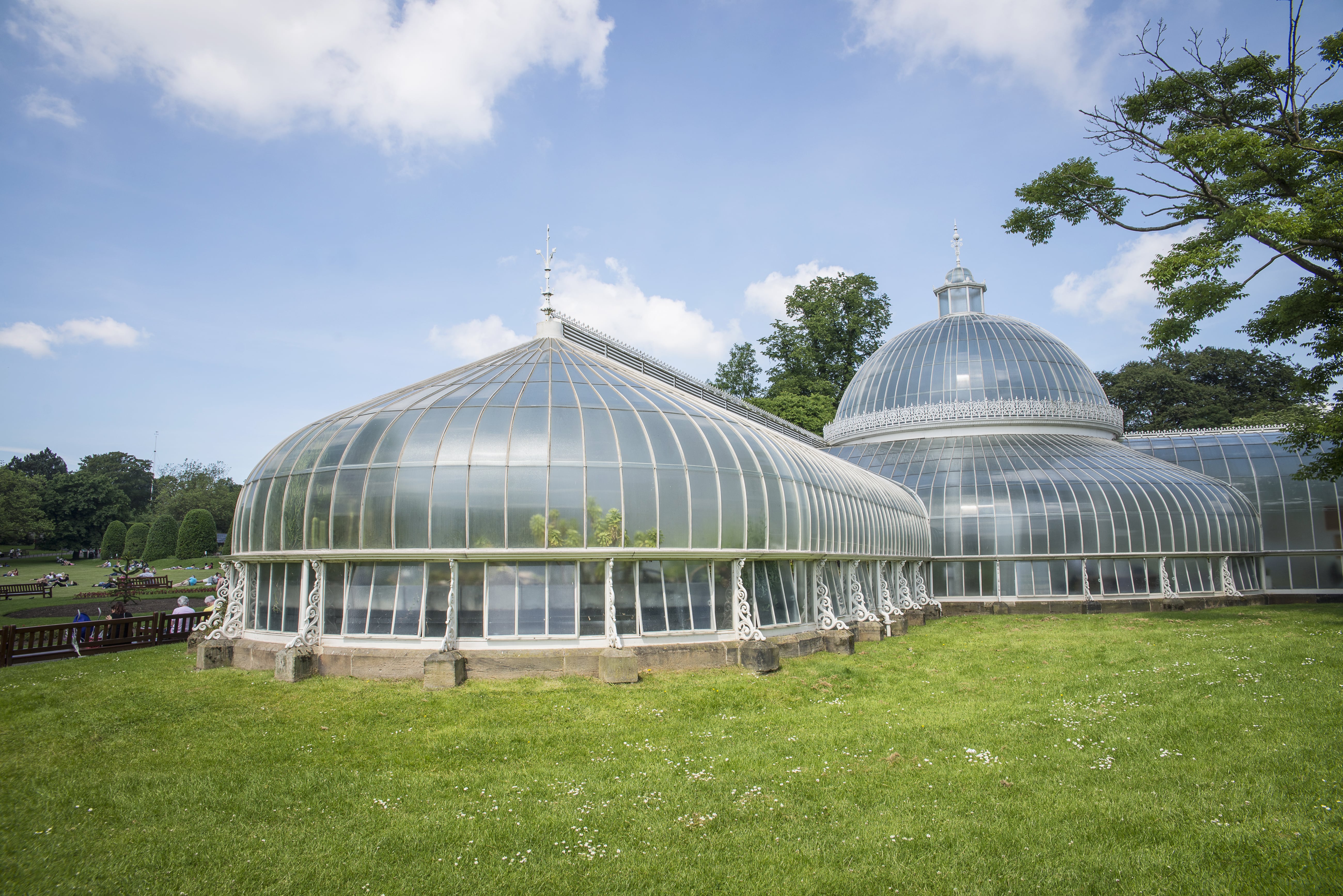 Named after its benefactor, Kibble Palace is an impressive and beautiful Victorian era glasshouse (The Kibble Palace is a 19th-century wrought iron framed glasshouse, covering 2137 m2 ) originally built for the wealthy merchant's private mansion and later relocated to the Royal Botanic Gardens. The building itself is worth the (free-to-enter) visit, but you will also find there over 120 year old ferns (including Australian and New Zealand tree ferns, indicating how temperate the palace is inside) accompanied by pretty marble statues. The building contains a large collection of orchids, tree ferns and carnivorous plants.

Quick head-count of any children ! 😊

The River Kelvin runs along the north side of the Gardens before turning southward and continues through beautiful Kelvingrove Park towards the River Clyde, the Kelvin walkway providing an uninterrupted walking route between the two green spaces.

After returning to the main entry to the Royal Botanic Gardens, walk downhill along Byres Road, past the Òran Mór. Further down, nearby lanes and byways have benefited from the business of Byres Road and now contain a variety of small businesses from tapas bars to up-market cheese providores to second-hand record stores. The most famous of these is Ashton Lane (on the left, just past Hillhead Underground station), which contains bars, restaurants and a cinema with a rooftop bar.

Jinty McGuinty’s Irish pub is a local institution and very popular, as is the nearby Vodka Wodka cocktail bar with reasonably-priced drinks. Both have terraced gardens at the rear that are a trap for a lazy sunny afternoon, sipping cool drinks with the friendly locals.

Perhaps one quick refreshment before you continue your way towards the other end of Byres Lane. Turn left along University Avenue and walk until finding the park (Hillhead Street, opposite the University Main Gate) and turn left. Walking uphill you will see Glasgow University’s McMillan Round Reading room on your right (in the park) and on your left lies Macintosh House (a rebuilt terraced house designed by, and furnished after, architect Charles Rennie Mackintosh), The Hunterian Art Gallery and then the University of Glasgow Library.

After finishing here, walk back down Hillhead Street and cross to walk through the University’s Main Gate.

Reputedly the inspiration for JK Rowling’s “Hogwarts”, the University of Glasgow is the second-oldest in Scotland (after St Andrews’) and the fourth-oldest university in the English-speaking world, having been established in 1451.

Along with the universities of Edinburgh, Aberdeen, and St. Andrews, the university was part of the Scottish Enlightenment during the 18th century. Famed for medicine and veterinary medicine and dedicated to the highest levels of academic excellence, the University of Glasgow was ranked the joint 69th best university in the world in 2019.

Its 85m tall spire is today a key landmark of the city, but the University was not always located here.

Teaching at the university began in the chapterhouse of Glasgow Cathedral on the other side of the city, subsequently moving to nearby Rottenrow, in a building known as the "Auld Pedagogy".

The university was later gifted 13 acres (5.3 ha) of land by Mary, Queen of Scots, in 1563. By the late 17th century its building centred on two courtyards surrounded by walled gardens, with a clock tower. Subsequently, in 1870, it moved to a site in the West End of the city, around three miles (5 km) west of its original location and bordered on two sides by the River Kelvin.

The new-build campus was designed by Sir George Gilbert Scott in the Gothic revival style and is stunning in style.

No wonder it inspired the fantastic imagination of Harry Potter’s creator.

The largest of these buildings echoed, on a far grander scale, the original campus's twin-quadrangle layout, linked in this case by building an open undercroft (another photo opportunity), above which is the grand Bute Hall with its stunning interior of iron columns, soaring ceiling, heraldic badges and stained-glass windows Note that at certain times of the year access may be restricted, when Bute Hall is used for examinations and graduation ceremonies. So, for Glasgow University tours, the best idea is to check on tour times and building accessibilty (including maps).

The landmark spire is on the far side of the main building and the university's Hunterian Museum also resides in this Main Building.

After returning to the Main Gate, walk east along University Avenue (or from the spire side, walk along the edge of the park until you meet the path near the corner with steps that lead down to Kelvin Way. From here you should be able to see Kelvingrove Bandstand across the road. Many bands have performed here, from The Stranglers to Van Morrison.

Turn right here and walk down Kelvin Way, which is a pleasant almost “country” walk so close to the city. About 50m along on your right-hand side is a statue of Lord Kelvin, after whom the nearby River Kelvin and Kelvin Way are named. Continue along Kelvin Way, across the bridge and turn immediately right to walk past the bowling greens that were used in the 2014 Commonwealth Games and towards Kelvingrove Art Gallery and Museum. 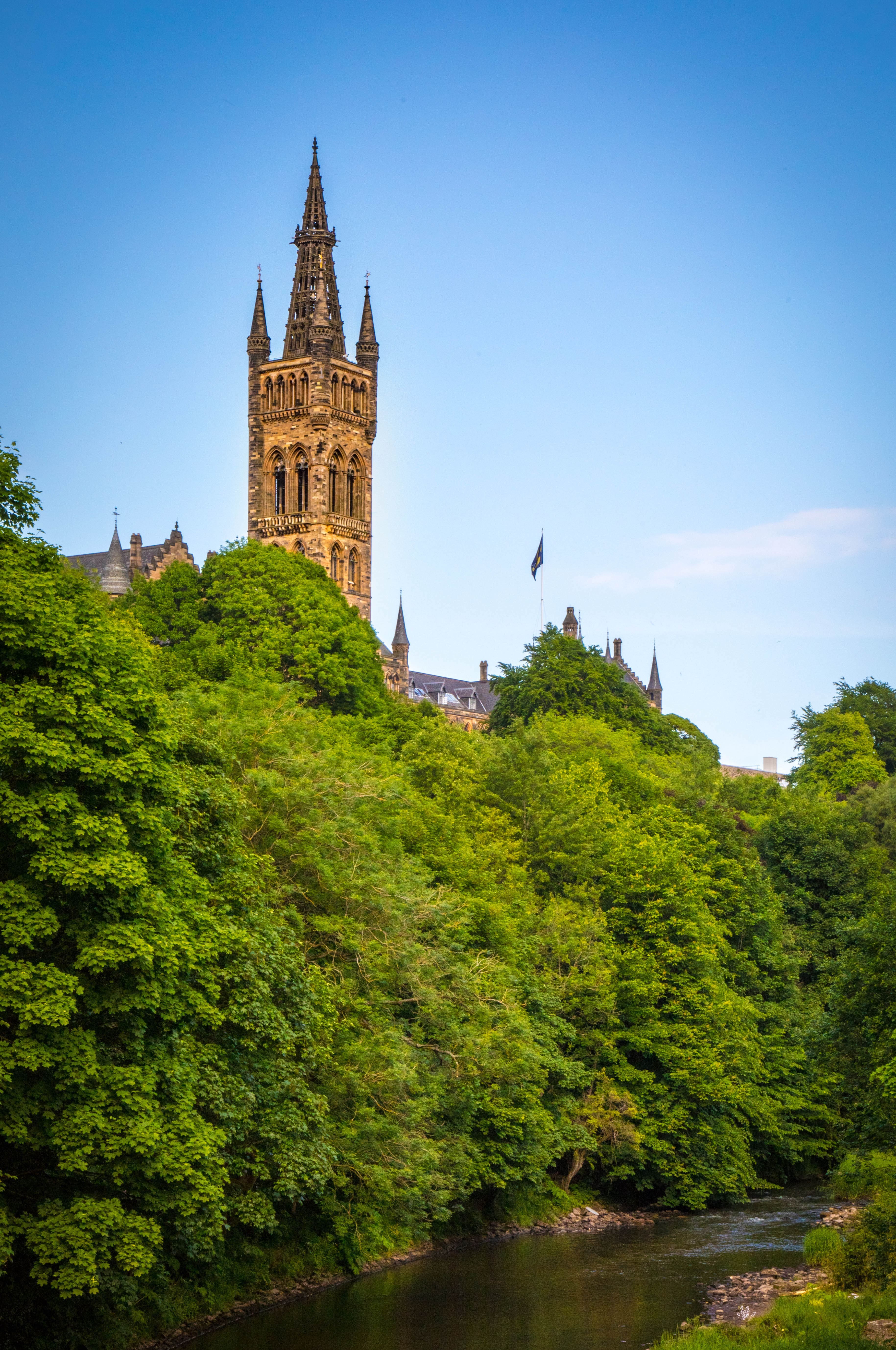 The spire of the University's main building is a local landmark. 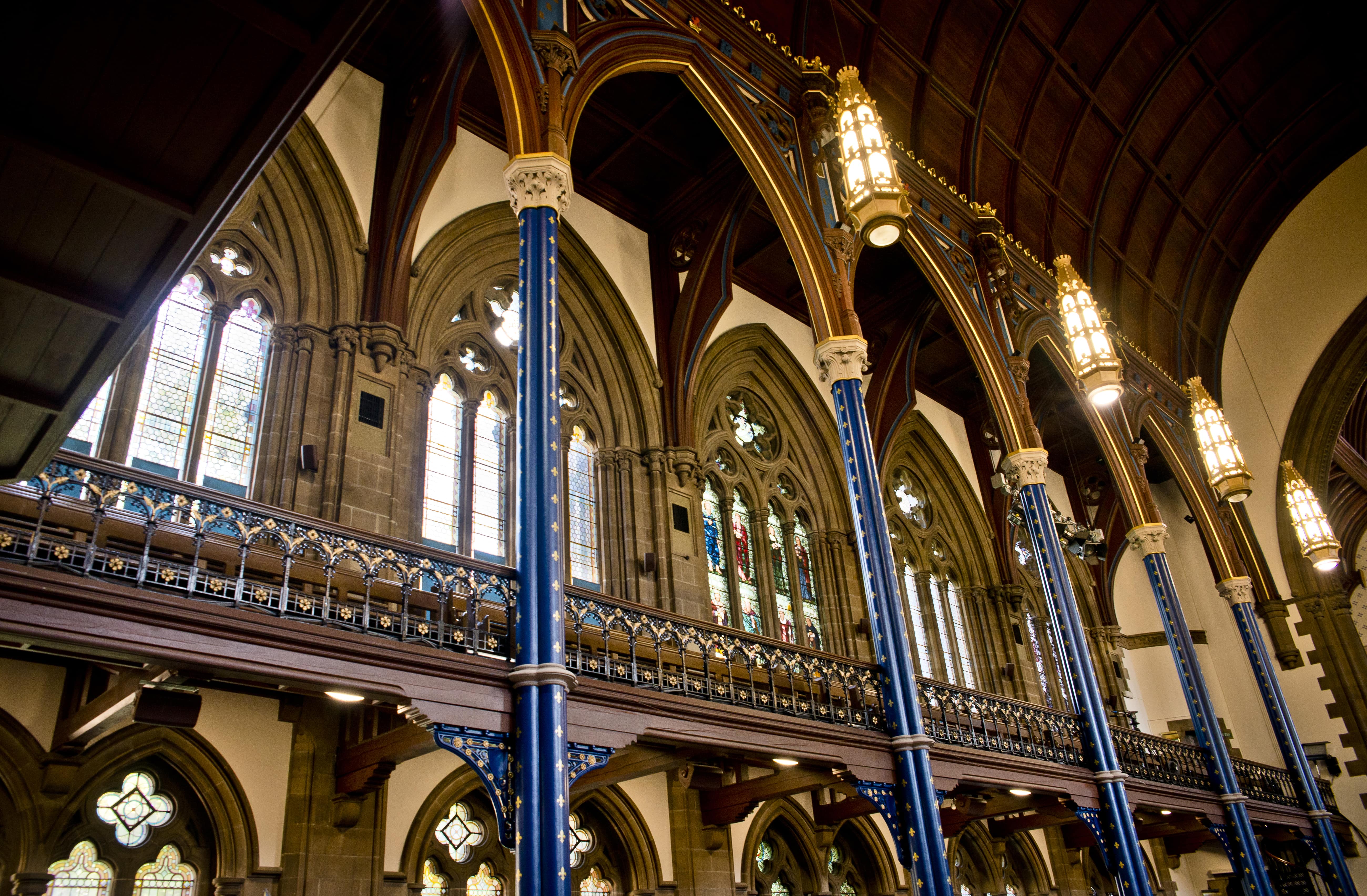 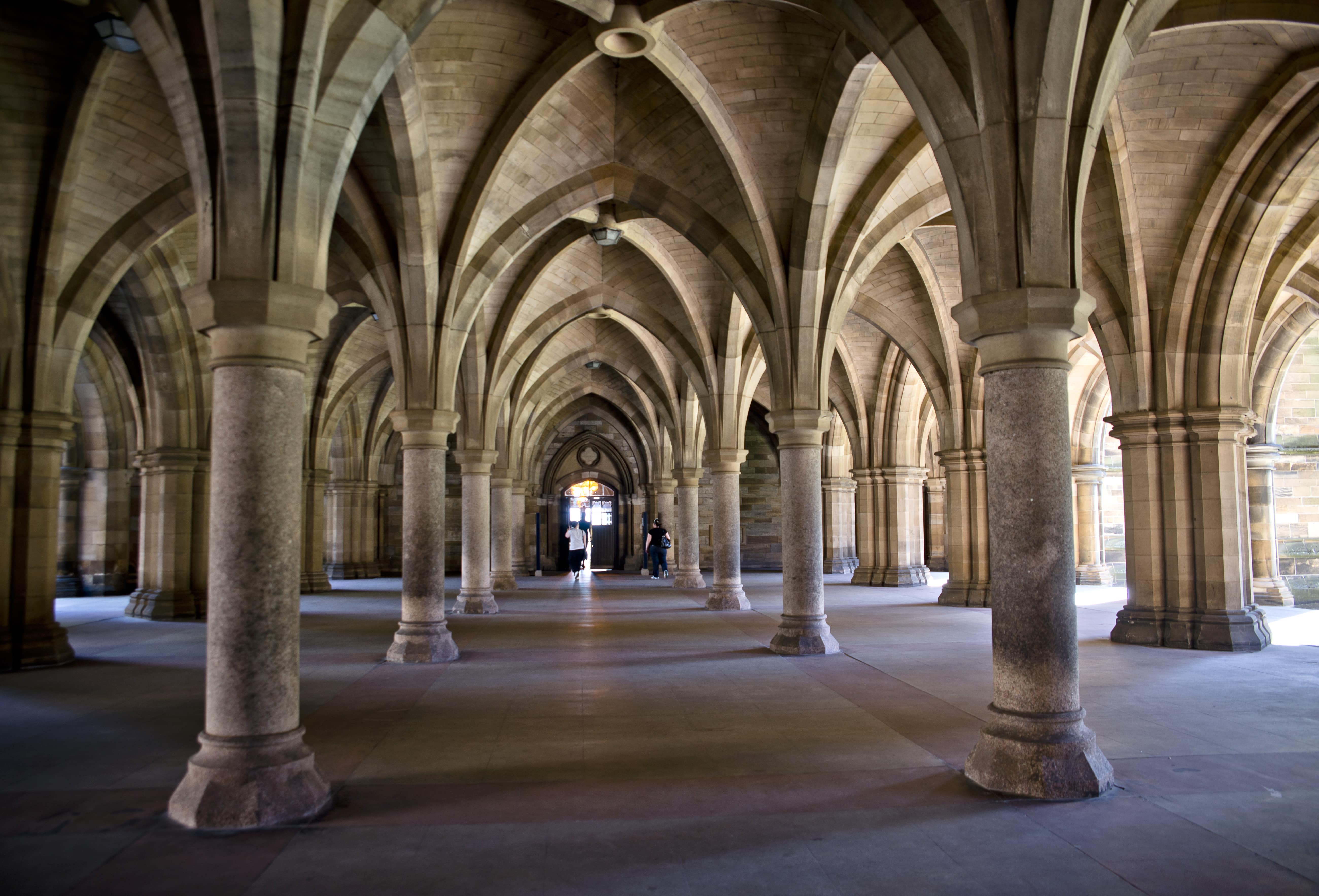 Cloisters of the University of Glasgow. Open lawn areas are on either side of this stunning sandstone structure.
Credit: VisitScotland / Kenny Lam. 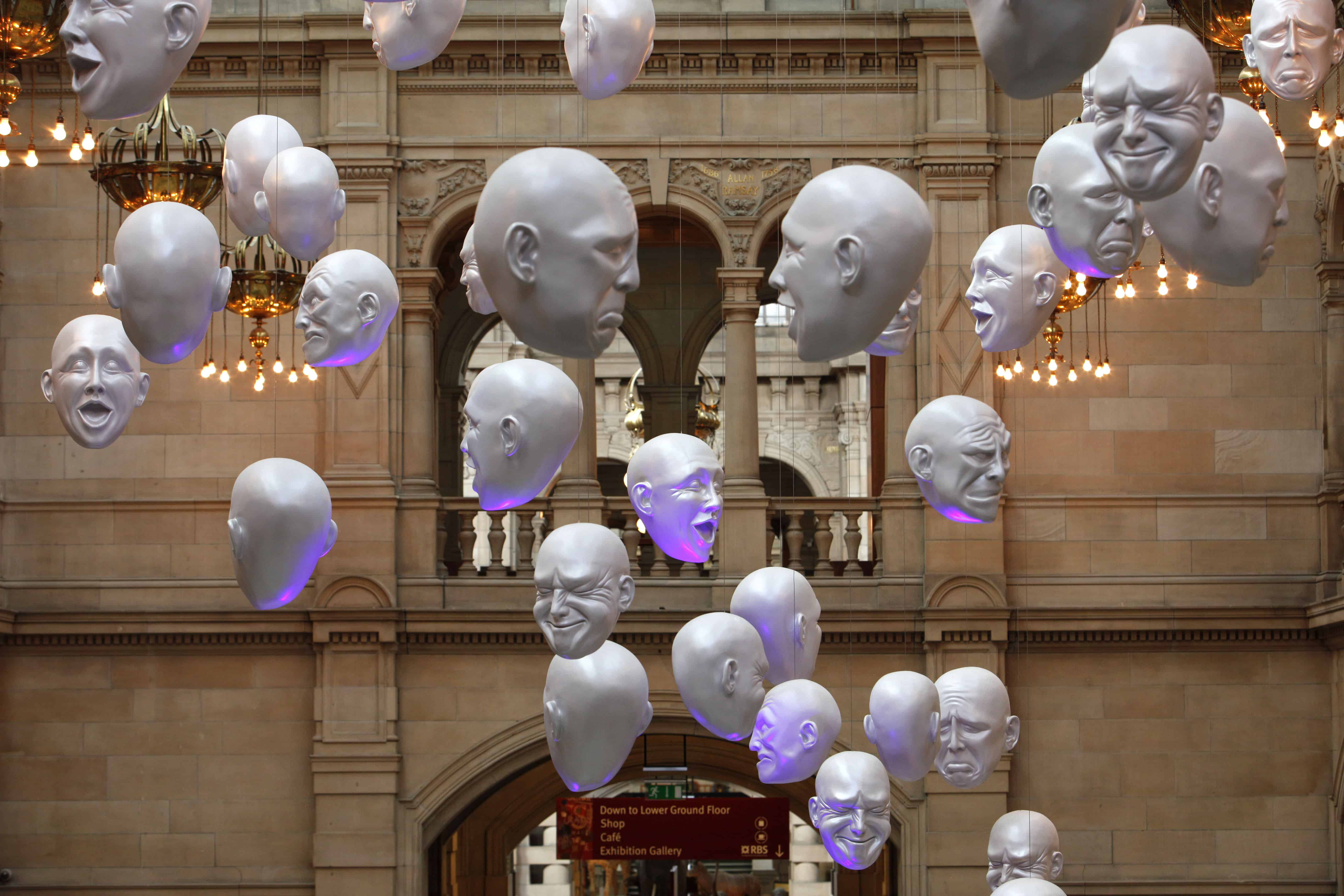 Kelvingrove Art Gallery and Museum houses one of Europe’s great art collections. It is the most popular free-to-enter (Glasgow is quite egalitarian and provides free access to its publicly owned galleries) visitor attraction in Scotland and the most visited museum in the United Kingdom outside London.

The purpose-built museum has an exterior constructed from red sandstone and was opened in 1901. The scope of the museum is wide-ranging and, when Kelvingrove re-opened in July 2006 after a three-year restoration and re-display project, it was organised into two halves: Life and Expression. The important collection of French 19th century paintings includes works by Monet, Gauguin and Renoir. Further highlights are Rembrandt’s ‘Man in Armour’, ‘Christ and the Adulteress’ by Titian and Salvador Dali’s ‘Christ of St John of the Cross’.

As Dali is one of my favourite artists, being able to see one of his works so close-up is a genuine thrill.

Scottish art includes paintings by the Scottish Colourists and the Glasgow Boys.

The Charles Rennie Mackintosh and the Glasgow Style Gallery features furniture, decorative panels and light fittings from the Ingram Street Tearooms, designed by Mackintosh in 1900-1912. The reconstructed rooms include the Ladies Luncheon Room, providing an insight into how Mackintosh envisioned the rooms he designed would actually be used.​

The Kelvingrove Art Gallery and Museum remains a favourite of mine. From the red sandstone architecture to the exhibitions inside (including the “floating” faces of the main gallery), I could spend a whole day here and be very happy.

Once you have had your fill, exit the museum on the side facing Argyle Street (the other side, faces the River Kelvin).

Walk directly forward to Argyle Street, where you have two options. Either:


Are you thinking that the culture, architecture around Glasgow University, the Botanic Gardens or vibe around Byres Road and Ashton Lane make this where you want to be based during your visit to Glasgow?

You can use our list of suggested places to stay or dine to make selections based on your preferred categories and locations,