While the west end’s architecture is predominantly Victorian and Edwardian, east of High Street is the oldest part of the city, which dates from medieval times.

Just 10 minutes walk east of the city centre (walk 1 block north from George Square, then turn right into Cathedral Place then left at its end. The cathedral is a few minutes further along, on your right), Glasgow Cathedral is the only medieval cathedral on the Scottish mainland to have survived the 1560 Reformation almost entirely intact.

This magnificent example of Scottish Gothic architecture was originally built in 1136, making the cathedral not only the oldest church in Scotland but the oldest building in all of Glasgow.

Glasgow Cathedral has strong links to the city’s history, starting with the city’s patron saint & founder, St. Mungo, whose church was built on this site and who was buried here in 612 AD.

Mungo was the first bishop within the ancient British kingdom of Strathclyde. As you wander around the cathedral you’ll see many connections down the ages, from the ancient trades on which the city built its fortune, to the military and the law.

Other connections run through the cathedral’s history: one of Scotland’s most famous literary sons, Sir Walter Scott, refers to the kirk (Scottish for church) in his novel, Rob Roy. And no visitor should leave it without gazing up at the breathtaking white ceiling in the Blackadder Aisle which was built around 1500 by Archbishop Blackadder.

Glasgow Cathedral (while quite beautiful, the picture here doesn't to it justice - the interior is breathtaking) was built in honour of St Mungo, on the spot where he was buried and was a site of pilgrimage until the Reformation.

His memory has survived and lives on both here (be sure to descend into the cellar to check out the 13th-century crypt, built to entomb St. Mungo) and through the statue sitting above the entrance to Kelvingrove Art Gallery and Museum and even in the fictionalised world of Harry Potter in which he is the patron saint of St Mungo's Hospital for Magical Maladies and Injuries.

From here, take a walk through the neighbouring Glasgow Necropolis, one of the most significant cemeteries in Europe and an exceptional display of Victorian Glasgow. 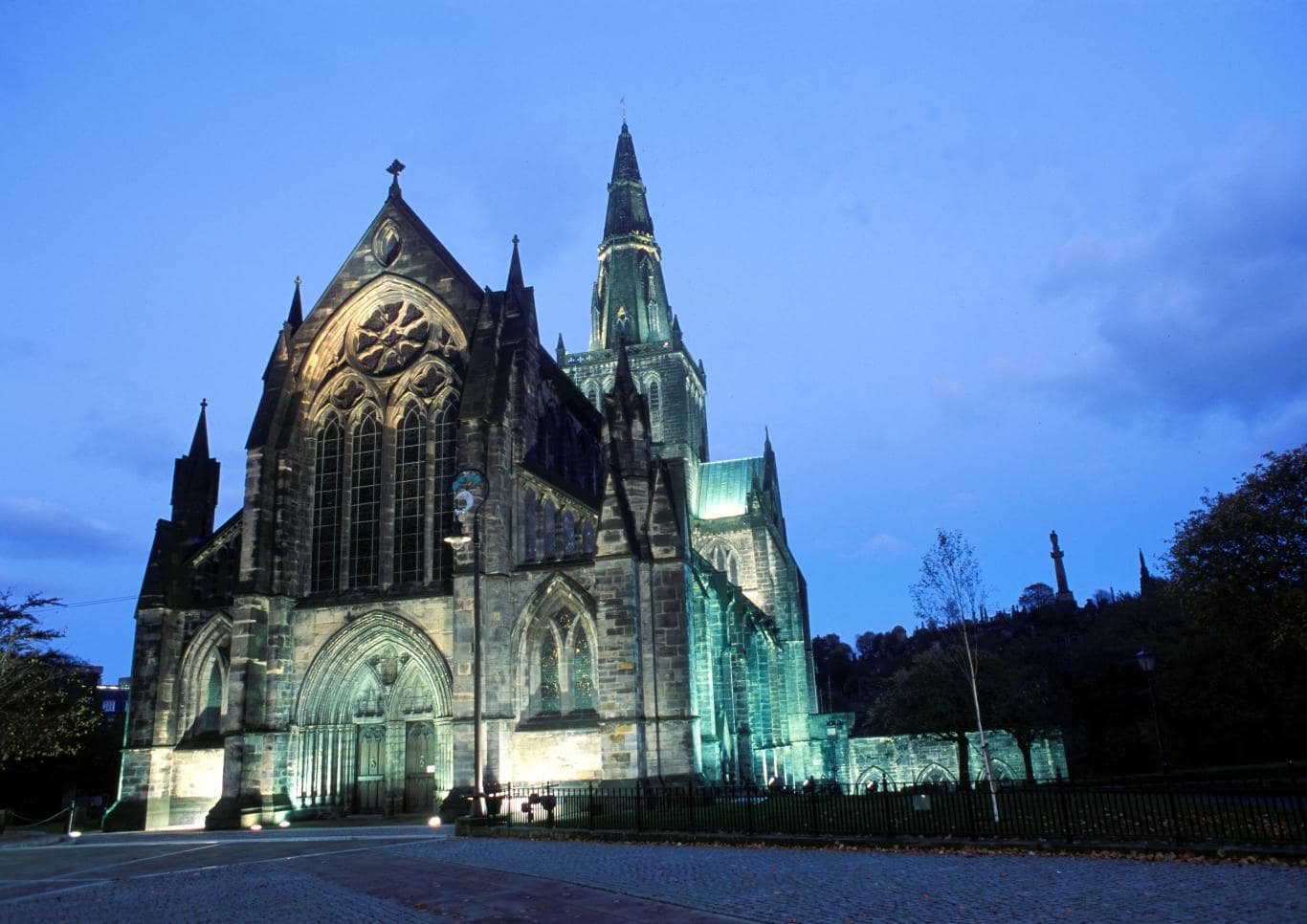 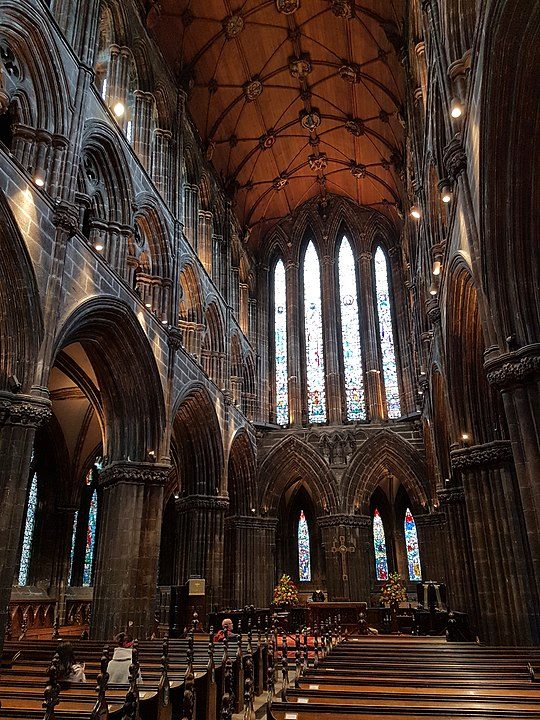 Directly behind Glasgow Cathedral is the Necropolis, a Victorian garden cemetery that covers 37 acres. Far from just a run-of-the-mill graveyard, it is filled with beautiful memorial stones and a number of eye-catching Victorian monuments, sculptures and buildings designed by renowned local architects & artists of the time, including Charles Rennie Macintosh.

Its meandering pathways open to views of the cathedral and looking westwards, one of the most spectacular views of the city. From this perspective, you can appreciate the mix of old and new architecture and see just why Glasgow is called “the Dear Green Place”.

The Necropolis was built when Glasgow was the second city of the empire. It remains exceptional in its contribution to the townscape, its symbolic relationship to Glasgow Cathedral and to the medieval heart of the City.

From here it is a short walk down to the award-winning St Mungo Museum of Religious Life & Art, named after Glasgow's patron saint.

It’s a haven of tranquillity in this bustling city. 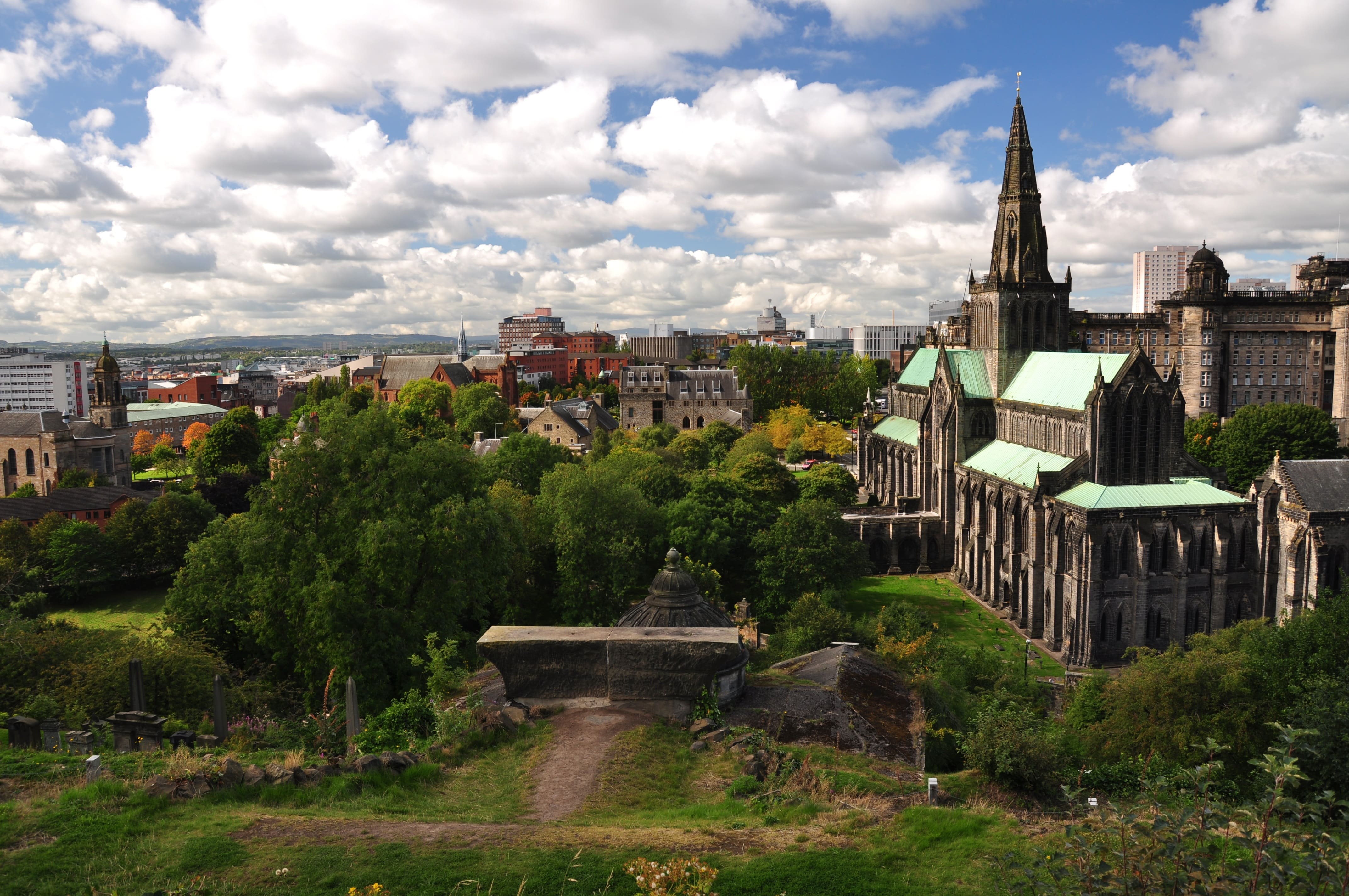 In the heart of medieval Glasgow lies the award-winning St Mungo Museum of Religious Life and Art, which, while named after Glasgow’s patron saint, who brought the Christian faith to Scotland in the 6th century, was the first museum in the world dedicated to all the major world religions.

The St Mungo Museum examines the world religions, their rites and how their doctrines deal with the shared issues of life and death. Its galleries are filled with works of art and artifacts which explore the importance of religion in people’s lives, across the world and across time. Here you’ll find a magnificent Islamic prayer rug made in Turkey in the 1600s, a carved Nigerian figure intended to represent the spirit of smallpox to assist in healing, Egyptian mummies, Hindu statues, as well as stunning stained-glass windows.

What I especially like is how the museum looks at the humanity shared by all major religions. It seeks harmony and inclusion, rather than judging which "one" is somehow "best" (which seems to me to be a frailty of the human condition).

The imposing building in which it’s housed was built in the Scottish baronial style, and was intended to reflect the architecture of the original Bishops’ Castle, the site which the museum occupies.

By most accounts, St Mungo arrived in Glasgow in around AD 540 in his early twenties and established a monastery on the banks of the Molendinar Burn, a tributary of the Clyde. He spent some time away from Scotland living in Wales and even travelling to Rome. He later returned to the Clyde at the invitation of the King of Strathclyde, Roderick Hael. Mungo lived a most austere lifestyle, converting many to Christianity. The community which grew up around him was known as "Glasgu" (the dear family) and grew into the city of Glasgow.

One of his sermons contained the words, "Lord, let Glasgow flourish by the preaching of The Word". Shortened to "Let Glasgow Flourish", it is now the city's official motto.

Today, the museum regularly hosts temporary exhibitions and a variety of events, from family-friendly activities to talks relating to religion in Scotland today. To rest or reflect, you can relax in the museum café, which opens out into a Zen Buddhist garden in the courtyard.

From here take the bus or walk down High Street past the Merchant City Clock Tower to the stop at McLennan’s Arch – the entrance to Glasglow Green.

Glasgow Green is a 55 hectares/136 acres site and is by far the oldest of the city's parks. It is situated within walking distance of the city centre, east of the Saltmarket.

In 1806, the year after Admiral Horatio Nelson's death, a 43 metre (143 ft) tall monument was erected in the Green. The first civic monument in Britain to commemorate Nelson's victories, it predated Nelson's Pillar in Dublin by two years and Nelson's column in London by three decades.

When the original Assembly Rooms, designed by James and Robert Adam, were demolished in 1890, the arch that formed the centrepiece of the building was reconstructed and sited at the western end of Monteith Row in 1892 at the expense of James McLennan. It was then moved again in 1922 to the west edge of the Green, facing Charlotte Street. In 1991 it was moved finally to its present position facing the Old High Court in the Saltmarket. It is now known as "The McLennan Arch".

Located in the middle of the Green and opened in 1898, the People's Palace was designed as a cultural centre for the people of the east end. Originally arranged with reading rooms on the ground floor, a museum on the first floor and an art gallery on the second floor, since the 1940s the building has been used as a museum dedicated to the history of Glasgow.

It is well worth a visit for a deeper understanding of this great city and its people.

The Doulton Fountain, given to Glasgow as part of the International Exhibition of 1888, was moved to the Green in 1890. The 46-foot (14 m) tall fountain was built by the Royal Doulton company to commemorate Queen Victoria's reign. It featured a 70-foot-wide (21 m) basin, with a slightly larger than life-size statue of Queen Victoria, surrounded by four life-size statues of water-carriers representing Australasia, Canada, India and South Africa.

A lightning strike in 1891 destroyed the statue of Victoria, and rather than let the city replace the statue with an urn, Doulton paid for a second hand-made statue to be produced. In the 1960s the fountain fell into a state of disrepair. However, in 2002 a £2 million restoration programme was started that restored the fountain to its original condition. As of 2004, the fountain has been placed in a new location, in front of the People's Palace.

In more recent times, the Green has become the venue for many festivals for the people of Glasgow (and beyond). In 2004, the Green was host to Download Festival Scotland, a live music festival featuring Metallica, Linkin Park, Korn and Slipknot. It hosted Radio 1's Big Weekend (the biggest free ticketed music event in Europe) in May 2014, which featured some of the biggest acts in the world performing to over 50,000 spectators across the weekend.

It is also the current home of the World Pipe Band Championships and the final stage of The Great Scottish Run, normally held in early October, as runners enter via the McLennan Arch.

As part of the 2014 Commonwealth Games legacy, Glasgow Green was one of 27 sites across the city protected by Fields in Trust through a legal "Minute of Agreement" safeguarding the future of the space as public recreation land for future generations to enjoy.

From Doulton Fountain, walk north to London Road and catch a bus going left towards the city centre. Depart at the first stop after High Street to see the Merchant City Clock Tower, or continue on, until the first stop after the bus turns right into Glassford Street at the start of the pedestrian-only Argyle Street. Backtrack 50 metres and walk along Argyle Street to return to Central Station. Alternatively, walk further in the direction the bus was taking. At the top of Glassford Street is Ingram Street – the heart of Merchant City. Turn left here to head towards the Gallery of Modern Art. One block along is the Corinthian Club - an upmarket bar where you can pause for a well-earned refreshment. Turning right here instead will take you back to George Square. 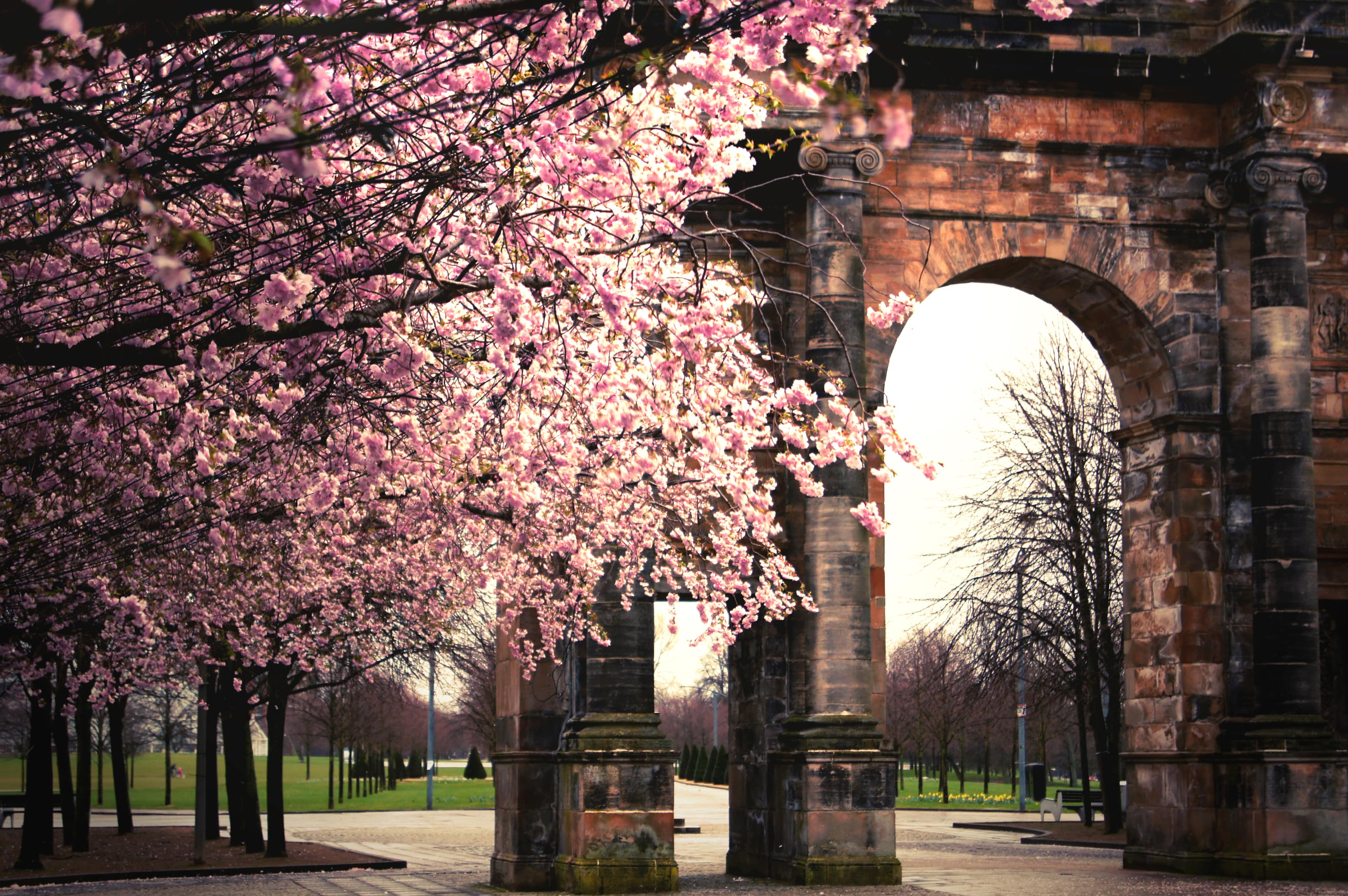 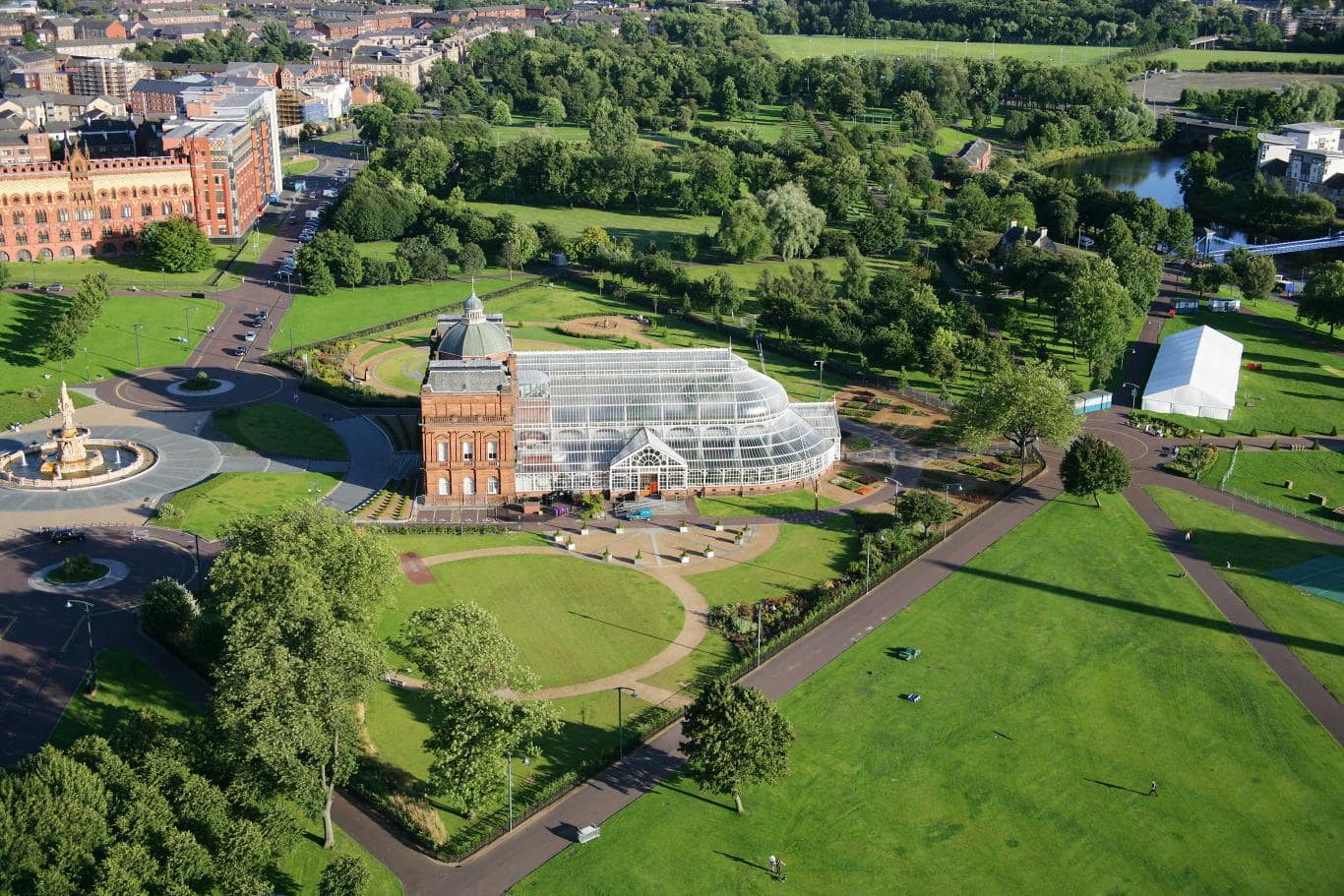 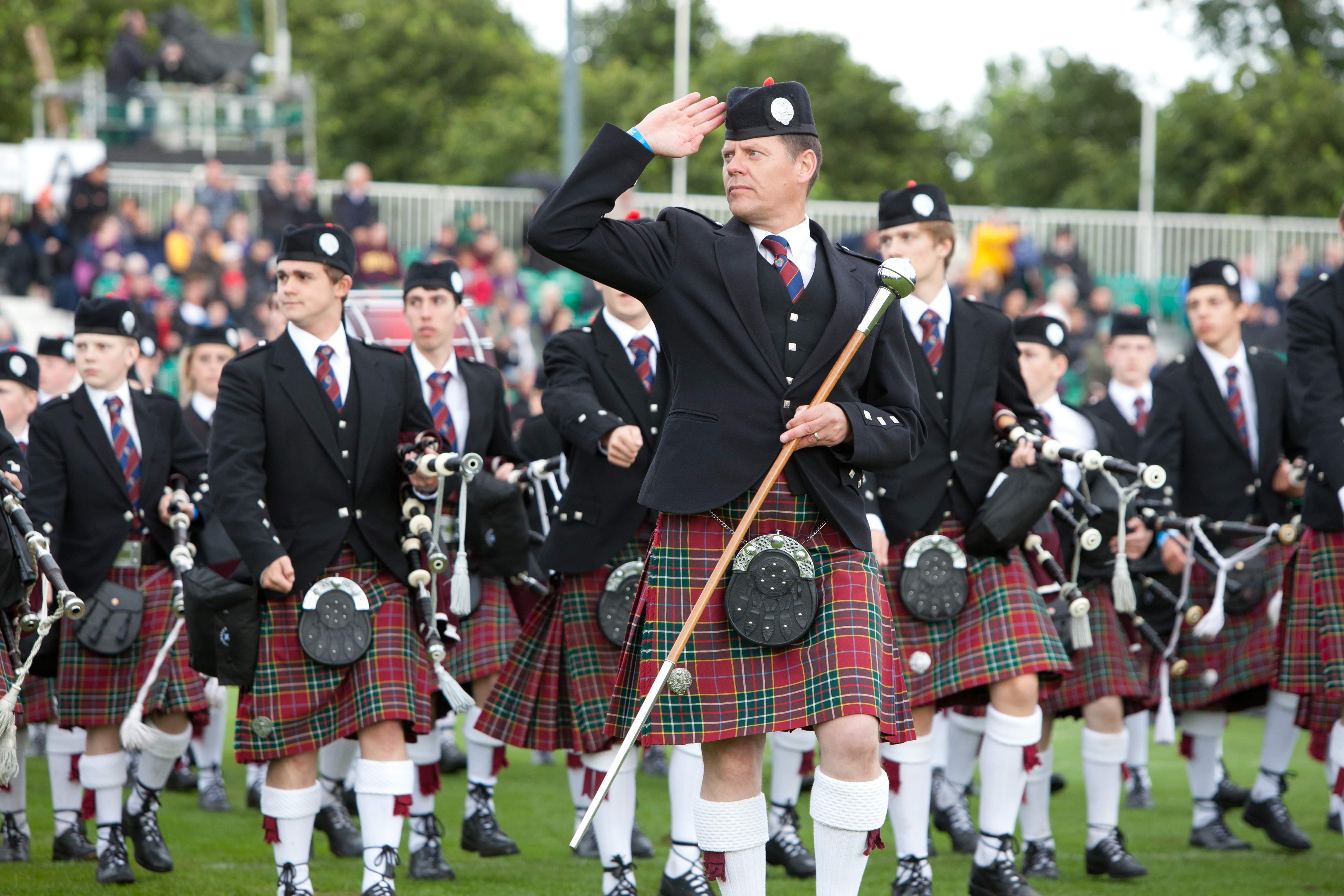 Following this, it is time to head for the open spaces and history of the southside of the River Clyde.