You are here: Top Picks Of Places › Glasgow - complete guide to our dear green place › Glasgow Central - heart of the city 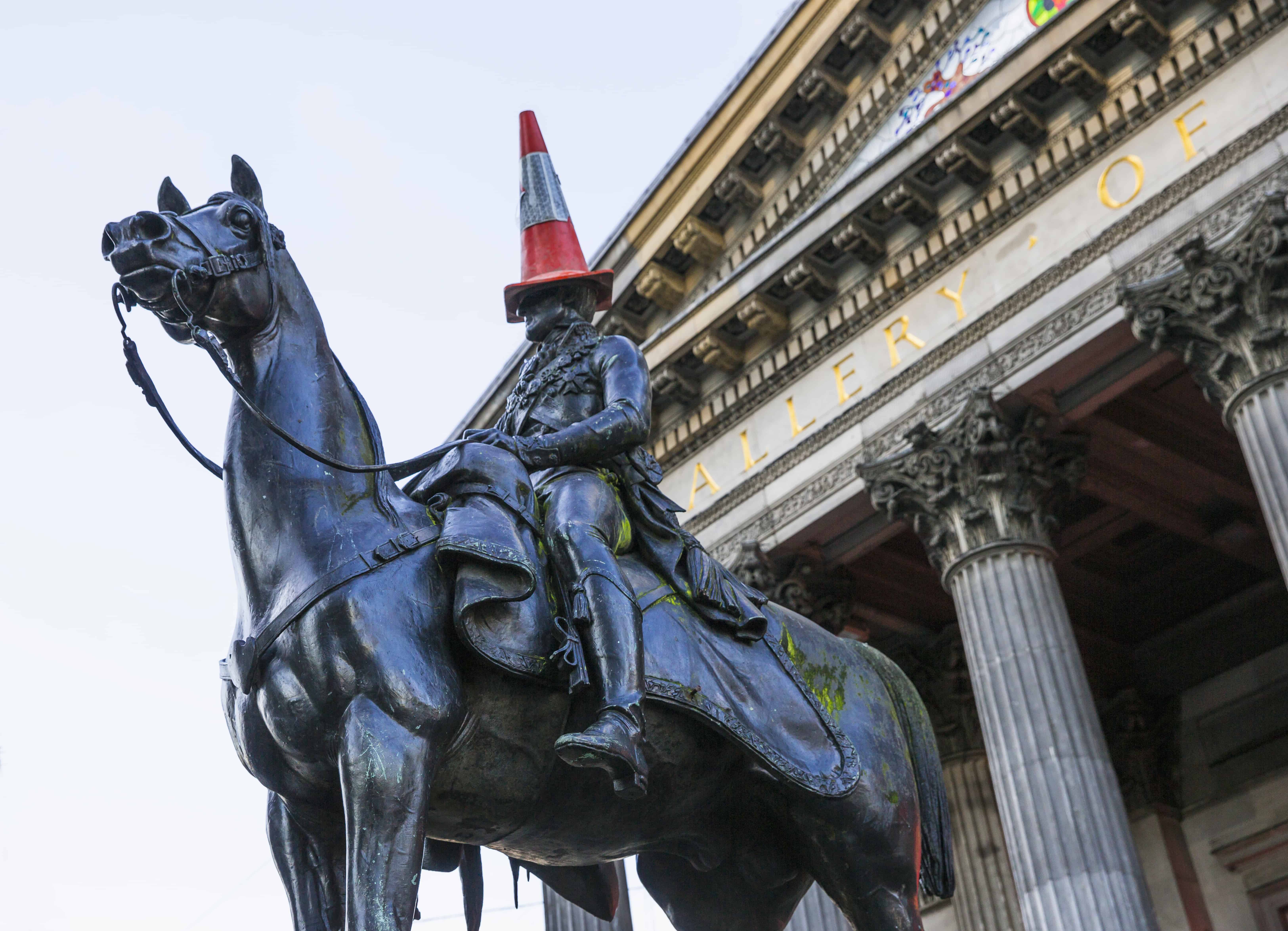 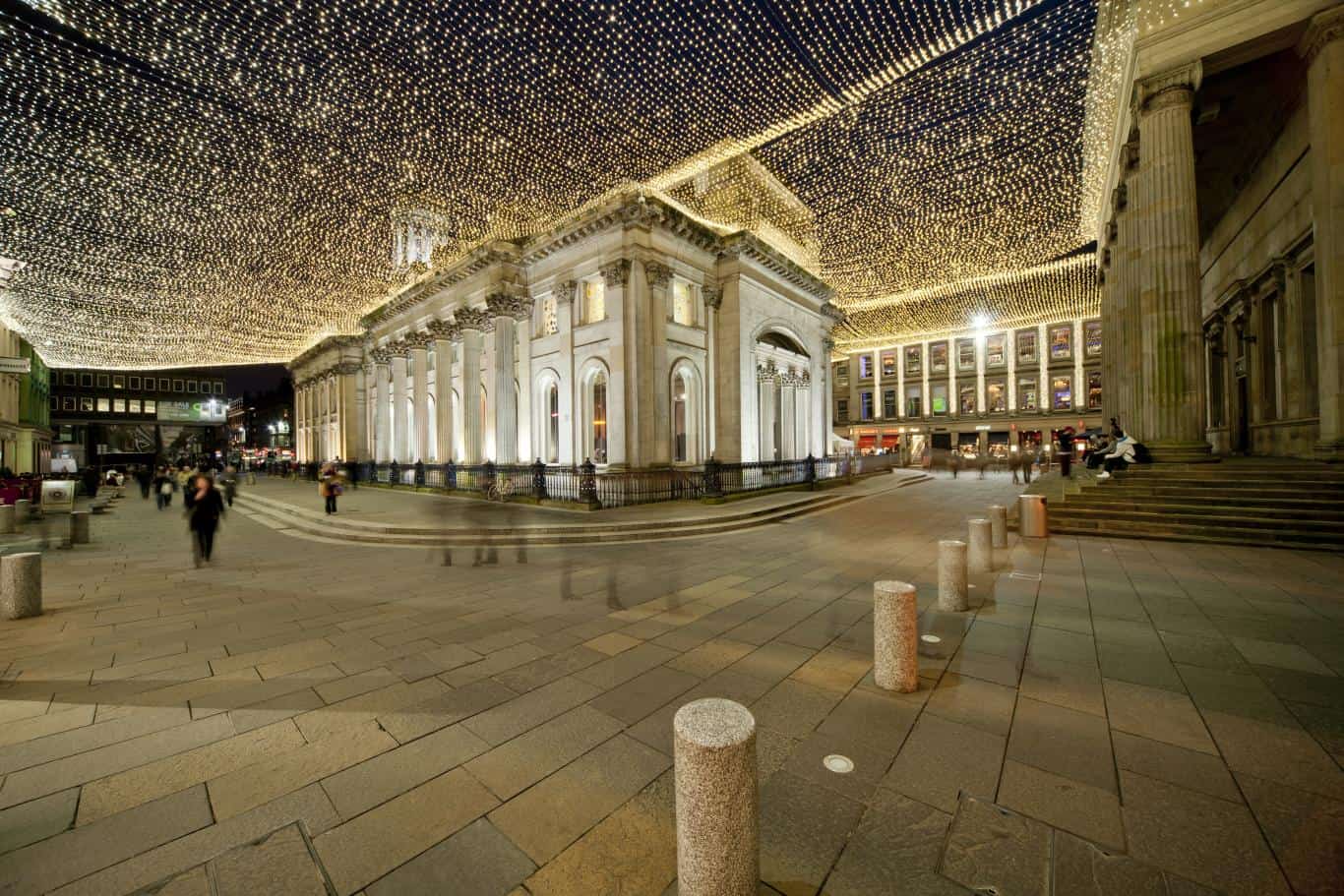 Glasgow Central is the twelfth-busiest railway station in Britain, and the busiest in Scotland. It is a central hub for local routes as well as from where trains run north to the highlands, east to Edinburgh and south to London’s Euston Station.

The station's famous architectural features are the roof, consisting of 42,000 individual panes (the largest glass roof in world) and the large glass-walled bridge that takes the station building over Argyle Street, nicknamed the 'Hielanman's Umbrella' (Highlandman's Umbrella) because it was used as a meeting place for highlanders living in the city after they relocated southwards, seeking employment.

The tour of Glasgow Central is very interesting as it goes deep beneath the station to reveal some of Glasgow’s evolving past. The station has been built level-upon-level and each one tells a story about all that travelled on the trains that passed through it at the time. 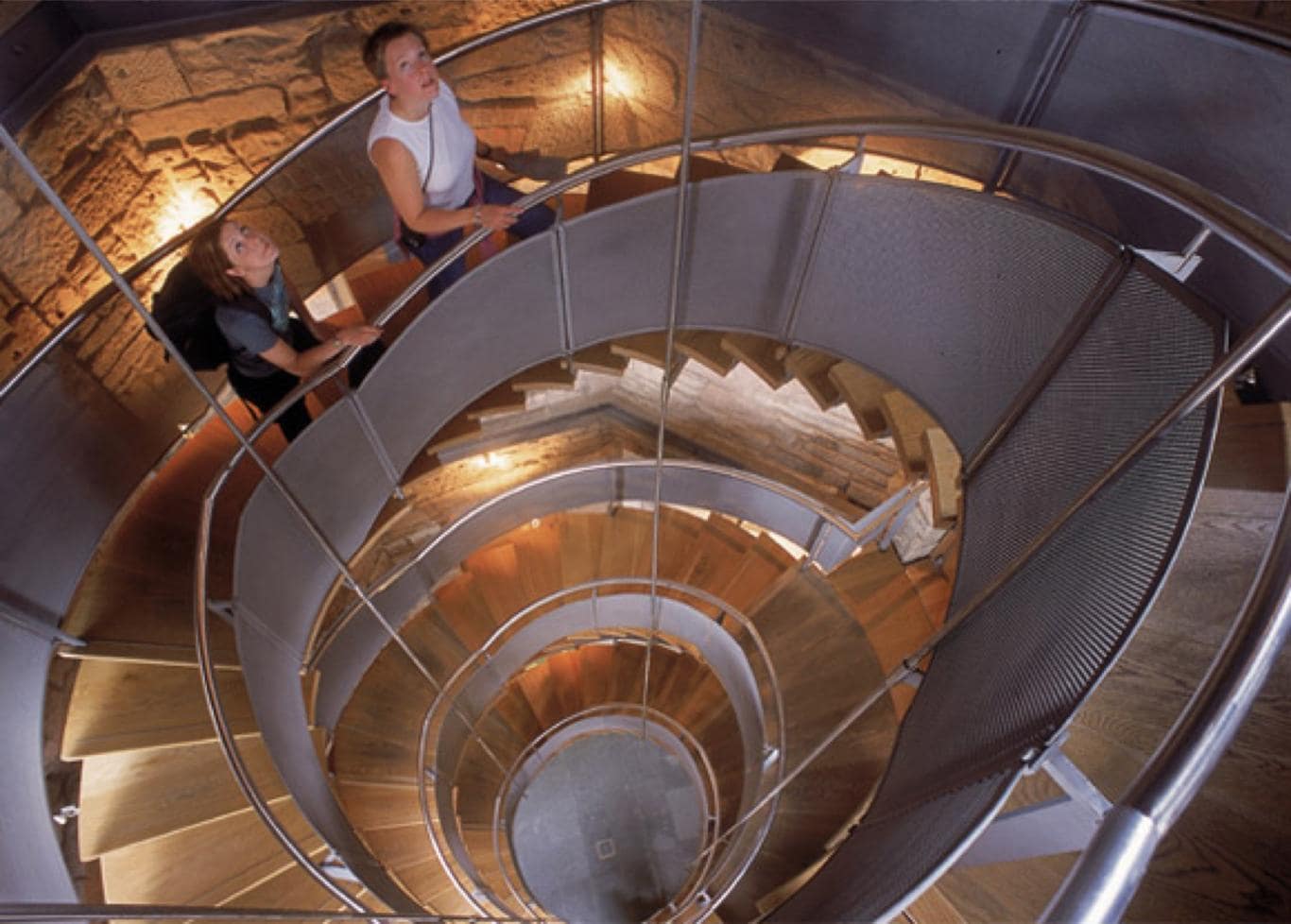 Just a block away from Central Station in an alley off Mitchell Street is The Lighthouse, which is Scotland's Centre for Design and Architecture. It was opened as part of Glasgow's status as UK City of Architecture and Design in 1999.

Fittingly, The Lighthouse is housed in the former Glasgow Herald building, which was the first public commission completed by Charles Rennie Mackintosh.

Today, the building boasts swarms of inquisitive people scaling the spiralling steps to witness the breathtaking panoramic views. (hint: looking up or down the middle of the spiral staircase presents a very attractive photo opportunity). A multifunctional centre, the floors host an enthralling visitor centre, coveted exhibition space and events venue, each of which empower the centre to champion Scotland’s design and architecture industries.

If you are a fan of Charles Rennie Mackintosh then this place is a must-see as Level 3 is home to the Mackintosh Centre.

It could form the start of a whole weekend dedicated to appreciating Macintosh architecture, as there is a specific tour “The Mackintosh Trail”, covering Glasgow and Helensburgh.

Opened in 1996, the Gallery of Modern Art is housed in a neoclassical building in Royal Exchange Square , right in the heart of Glasgow city centre.

Built in 1778 as the townhouse of a wealthy Glasgow Tobacco Lord, the building went through a series of different uses prior to becoming the Gallery of Modern Art.The exhibits make this a well worthwhile stop and include works by David Hockney and Andy Warhol as well as Scottish artists such as John Bellamy and Ken Currie.

In front of the gallery, on the Queen Street pavement, stands an equestrian statue of the Duke of Wellington sculpted by Carlo Marochetti in 1844. The statue usually has a traffic cone sitting on its head.

This too makes a good photo opportunity, as it captures perfectly the city's humour and light-hearted attitude to authority. 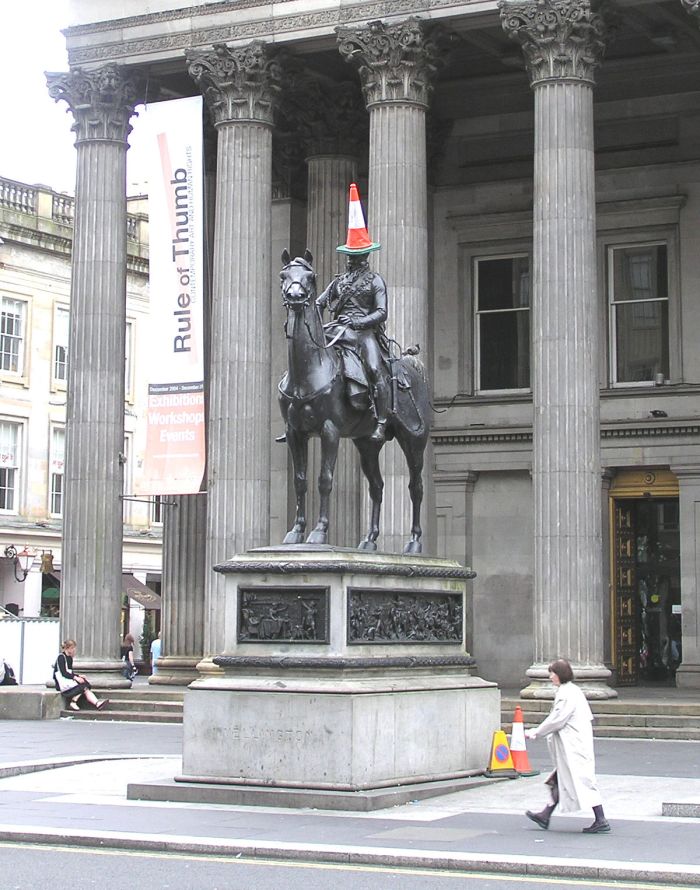 From here, heading east one block then turning left into Buchanan St then right into Exchange place and walking another block further east to Queen Street takes you to George Square…… 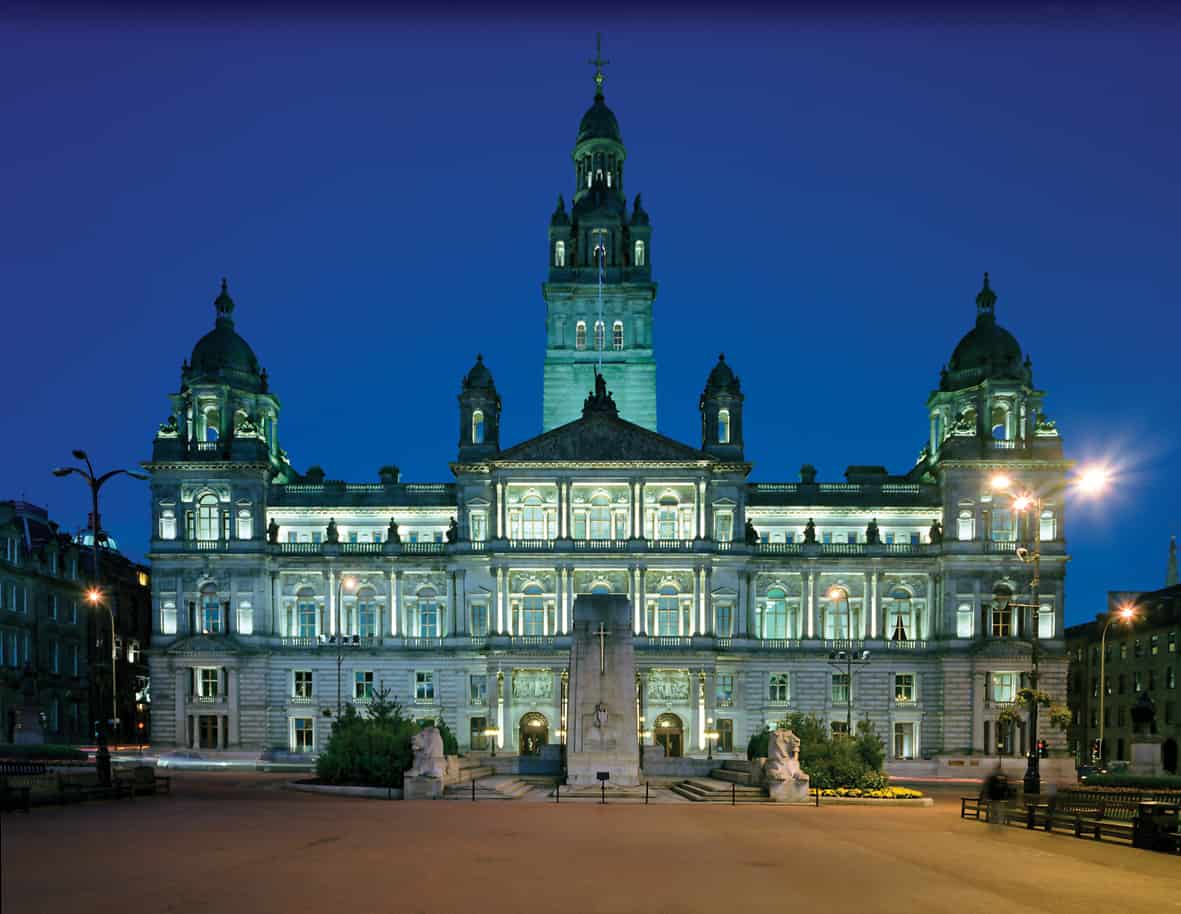 At the heart of Glasgow's historic Victorian city centre stands George Square. Named after King George III and opened by Queen Victoria in 1888, it is the principal civic square in Glasgow and boasts an important collection of statues and monuments, including those dedicated to Robert Burns, James Watt, Sir Robert Peel and Sir Walter Scott, with Queen Victoria herself depicted on the front of the building.

Overlooking the square is the Victorian architecture of one of the city’s most iconic and imposing buildings, the City Chambers, whose magnificence tells the story of the wealth and industrial prosperity of the time when Glasgow was the Second City of the Empire. It’s one of the most beautiful civic buildings in the UK and a huge favourite amongst locals and tourists.

Going on one of the free, guided tours is a must. Walk up the largest marble staircase in Western Europe, made of imported Italian Carrara marble. The grandeur continues through to the magnificent Banqueting Hall, where Nelson Mandela received his Freedom of the City award in 1993, and Sir Alex Ferguson his in 1999.

Public tours are conducted twice per day at 10.30am and 2.30pm Monday - Friday. (Free) Tickets for the tour can be obtained from the City Chambers reception desk 30 minutes prior to each tour commencing. Please note tickets are free and issued on a first come first served basis. There is no facility for individuals to pre-book for the tours.

The area around here is one of Glasgow’s oldest quarters and now known as Merchant City, so named because dating back to the 1750s it was home to the warehouses of wealthy merchants and “tobacco lords” (who prospered in shipping and, amongst other things, tobacco, sugar and tea).The name 'Merchant City' was not used historically. Historically the area was called 'Trongate', 'the tron' or Glasgow Cross, 'cross' or simply by most Glaswegians 'the toun' or 'the town'.

The district west of the High Street formed the historic backbone of the city, the development of what is now known as with wide, straight streets, vistas, and squares, marked the beginning of a process of aspirational residential movement westwards that would continue throughout the 19th century and into the 20th century with the development of Hillhead and the West End of Glasgow.

Having enjoyed a renaissance in recent years, Merchant City roughly lying within the old medieval heart of the city, is now full of cool bars, restaurants, boutiques and galleries, set against some of the city’s most endearing architecture.

The high ceilings and ornate interior of this former bank make it an attraction on its own. I particularly like the half-egg shaped seats that face towards folk sitting against the walls - a degree of privacy for more private discussions over your drinks.

From the front steps of the town hall, walk towards the far right hand side of the square to the end of George Street. This splits into two to go around a church and becomes Nelson Mandela Place…. 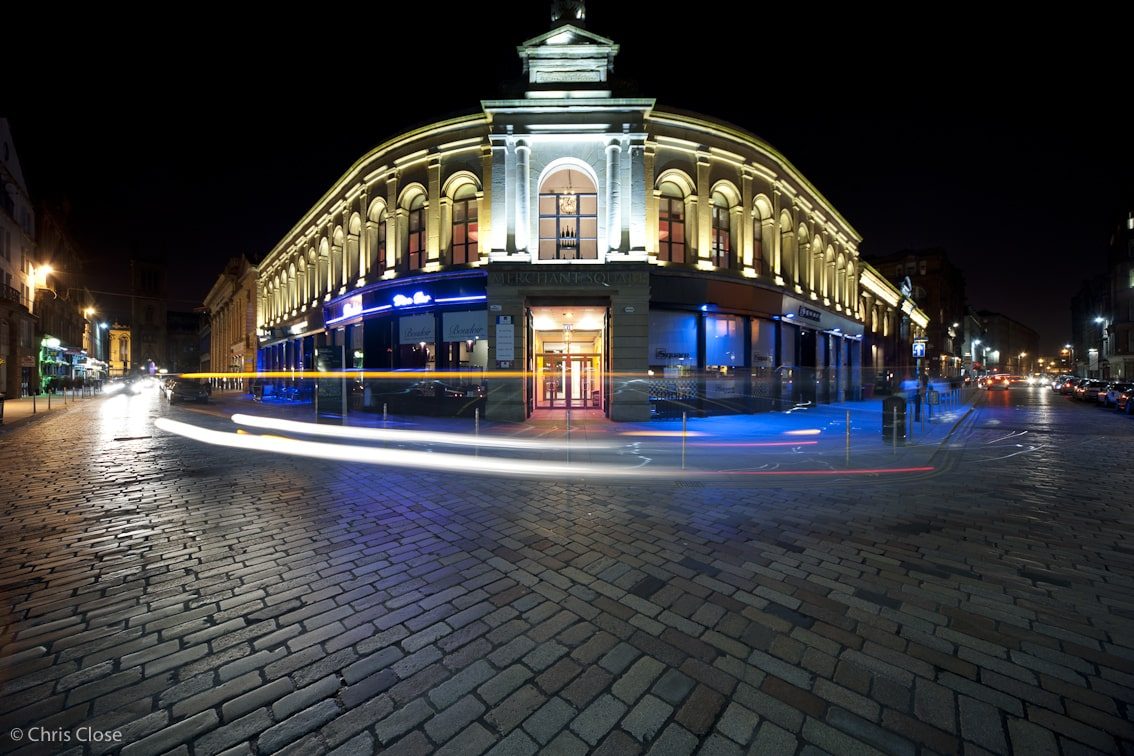 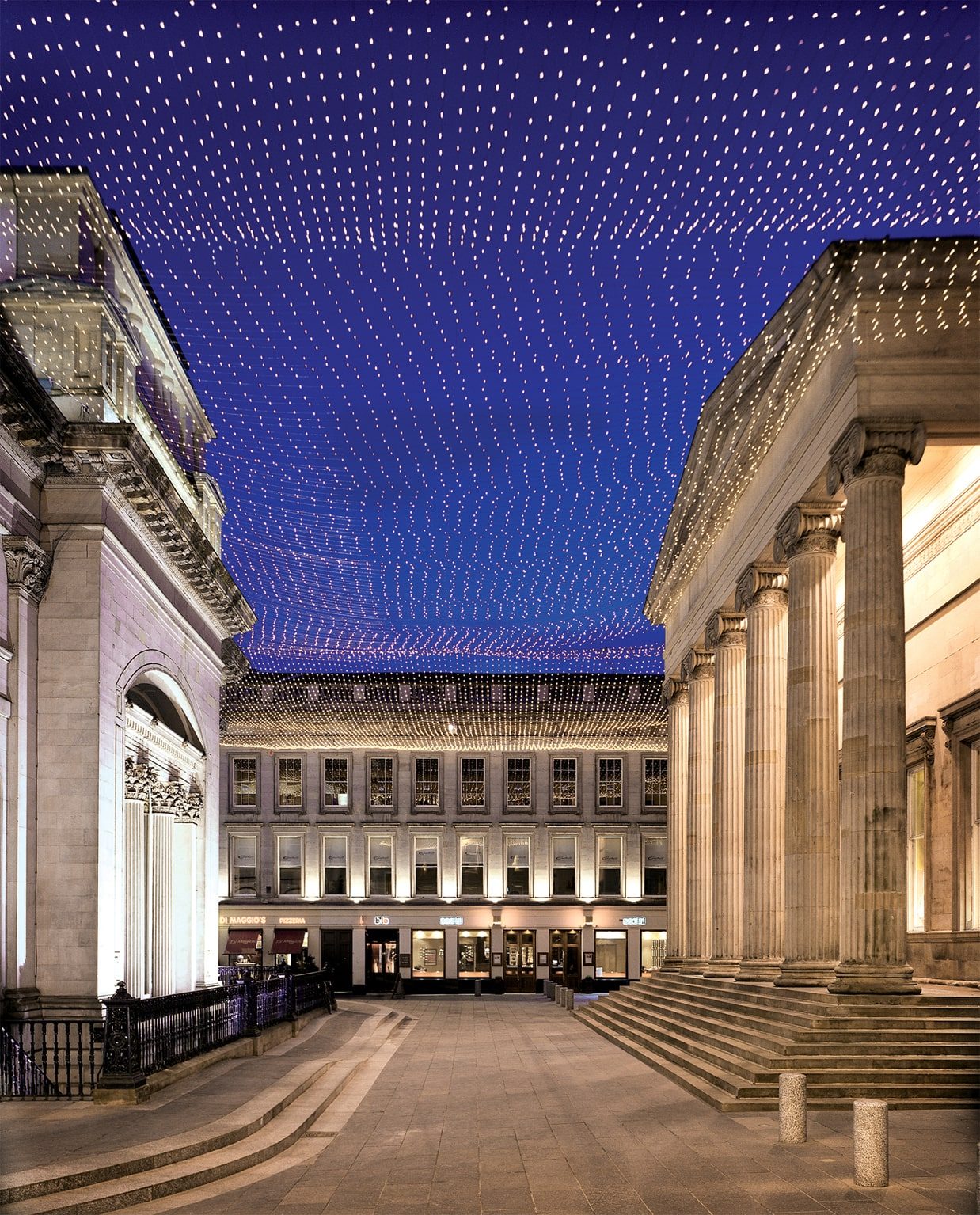 As well as their sense of humour, Glaswegians also have a strong sense of social justice. In 1981, when many others were still condemning him as a terrorist for his role in challenging the system of racial segregation in South Africa, Glasgow Council decided to set its face against then world opinion and awarded Mandela the Freedom of the City. In 1986, Glasgow brought more attention to the then jailed freedom fighter by changing the name of St George's Place in the city centre to Nelson Mandela Place.

At the time, the South African Consulate was based in the then Glasgow Stock Exchange building in the corner of the square, so the naming was quite symbolic as any mail the Consulate received would be addressed to Nelson Mandela Place. Mandela himself recognised Glasgow's stand against apartheid when many in the west ignored it.

Glasgow was one of the first cities he visited after his release. In a speech at the City Chambers in Glasgow on 9 October 1993, he said:

"While we were physically denied our freedom in the country of our birth, a city 6,000 miles away, and as renowned as Glasgow, refused to accept the legitimacy of the apartheid system, and declared us to be free." - Nelson Mandela

Before crossing to enter Nelson Mandela Place, on either side of you is a pedestrian-only mall which is…

Affectionately known as the “Style Mile”, this is the UK’s best shopping strip outside central London. Turning left and walking down the gentle hill will take you towards the River Clyde. Walking uphill takes you to the glass enclosed escalators (the green structure in the picture at right) that lead to the underground.

A tip especially for folk more familiar with glass and concrete malls - look up. Admire the beautiful buildings. Can you imagine a more beautiful place for your shopping? (Ok, well outside Italy then).

If short of time, or you would rather stay closer to home, rather than catching the underground now, instead continuing further uphill to the top of Buchanan Street will take you instead to the Glasgow Royal Concert Hall 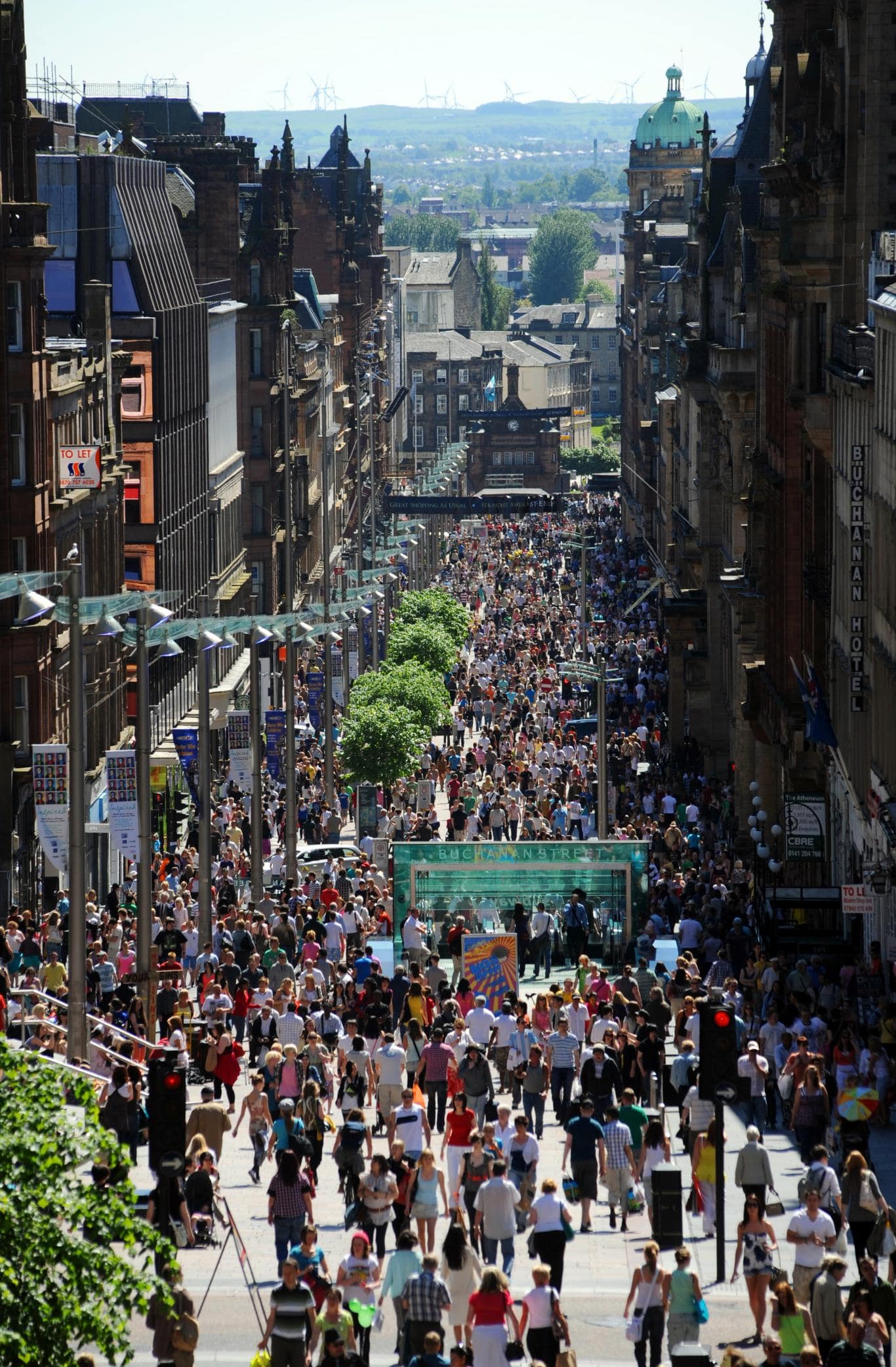 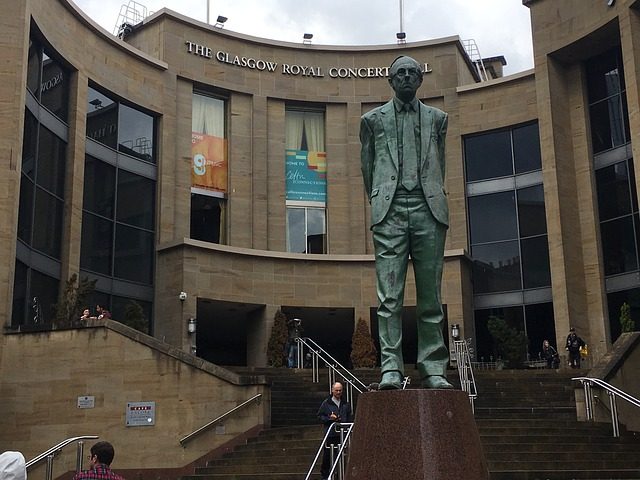 Glasgow is Scotland’s cultural home, hosting the Royal Scottish National Orchestra, the Scottish Opera and the Scottish Ballet and has been declared by UNESCO as one of only two dozen (as at 2019) Cities of Music. The Glasgow Royal Concert Hall is one of Scotland’s most prestigious venues and world renowned classical, jazz, pop, rock and folk artists take to its stages for nearly 250 performances each year! So whenever you visit, there is likely to be a performance of interest for you.

For example, together with concerts by the Royal Scottish National Orchestra, the venue has played host to the likes of BB King, Johnny Cash, Van Morrison, David Byrne, Ray LaMontagne, Belinda Carlisle, The Eels and Debbie Harry.

Pop in for a peek inside. You won't fail to be caught up in the beauty and magic of Scotland's premier music venue, the Glasgow Royal Concert Hall, as it proudly looks down Buchanan Street over the city.

Check out the box office too, as there may be a performance that you will want to take in while you’re here (but for more certainty it pays to book ahead).

From here, turn left into Sauchiehall Street and then take the first right turn. Walk up to (the very busy) Cowcaddens Road. Turning left here will take you to the Theatre Royal and then a block further is the Royal Conservatoire.

Crossing instead (with care) over Cowcaddens Road and taking the first left will lead you to National Bagpipe Museum.

Note also that Glasgow hosts the annual World Pipe Band Championship, the world's largest such festival, held every August on Glasgow Green. So even if you don’t play, you can still come and see and hear competitive piping at its best!

From here it is a 5 minute walk to Cowcaddens Underground station and a short trip to either Kelvinbridge station and the nearby Stand Comedy Club, or further on to Hillhead station on Byres Road in the West End.

After surfacing from the station, you are now in Glasgow’s West End. Walk uphill along Byres Road towards the next busy crossroad which is Great Western Road.

The Glasgow School of Art (GSA) is Scotland's only public, self-governing art school offering undergraduate degrees; post-graduate awards (both taught and research-led) and PhDs in architecture, fine art and design. The GSA has been ranked in the top 10 of specialist educational institutions in The Guardian University Guide, ranking it the top specialist visual arts institution in the UK. Its degrees are validated by the University of Glasgow.Place your content here.

The school is housed in a number of buildings in the centre of Glasgow, the most famous of which was designed by Charles Rennie Mackintosh in phases between 1896-1909.

Charles Rennie Mackintosh, born in Glasgow on June 7th 1868, won a competition to design the Glasgow School of Art, his first commission and most important building. The building confirmed the reputation of 28-year-old designer, not just as a master of the exterior but also as a superb interior designer.

The Mackintosh Building soon became one of the city's iconic landmarks and stood for over 100 years, prior to being severely damaged by fire in May 2014, painstakingly restored from 2016, only to be destroyed by a second fire in June 2018, with only the burnt-out shell remaining. Works are underway to rebuild it to its former glory.

More information on GSA and viewing its collection, including details of tours can be found here. 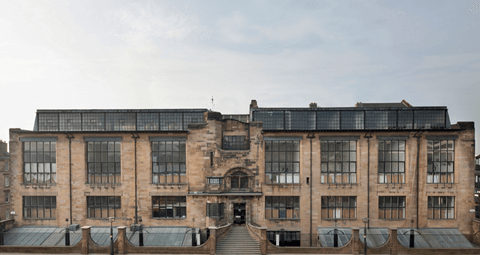 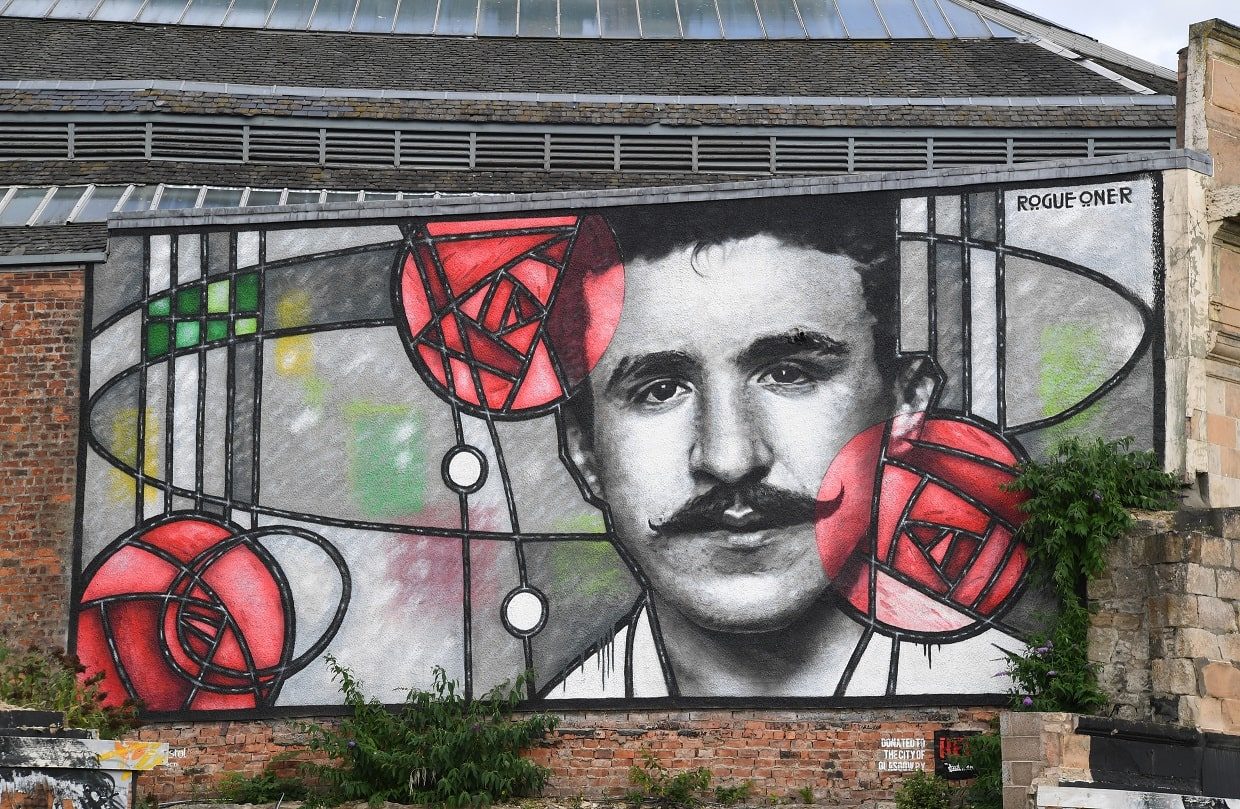 From here it is a short hop, skip and jump to the bohemian West End.


Already thinking that the culture, architecture or the vibe around Merchant City make this where you want to be based during your visit to Glasgow?

You can use our list of suggested places to stay or dine to make selections based on your preferred categories and locations,