You are here: Top Picks Of Places › Glasgow - complete guide to our dear green place › Clydeside And Finnieston

Originally a pumphouse servicing the docks and providing hydraulic power for a swing-bridge in the busy dock, it now houses a distillery and offers tasting and tours.

From the Clydeside Distillery, you can head towards the Riverside (& Transport) Museum. This is located further away from the city centre along the River Clyde and is best accessed by the hop-on-hop-off bus, as it is a bit of a walk.

Alternatively, instead head back towards the city centre, (with the River Clyde on your right), until reaching the SEC Centre, which marks the start of the large music venue precinct.

Originally a pumphouse servicing the docks and providing hydraulic power for a swing-bridge in the busy dock, it now houses a distillery and offers tasting and tours.

From the Clydeside Distillery, you can head towards the Riverside (& Transport) Museum. This is located further away from the city centre along the River Clyde and is best accessed by the hop-on-hop-off bus, as it is a bit of a walk.

Alternatively, instead head back towards the city centre, (with the River Clyde on your right), until reaching the SEC Centre, which marks the start of the large music venue precinct.

This is located further away from the city centre along the River Clyde and is best accessed by the hop-on-hop-off bus, as it is a bit of a walk.

The Riverside Museum is the current location of the Glasgow Museum of Transport, in the Glasgow Harbour regeneration district. On 18 May 2013, the museum was announced as the Winner of the 2013 European Museum of the Year Award.

The purpose-built Museum replaced the previous home for the city's transport collection, at the city's Kelvin Hall, and was the first museum to be opened in the city since the St Mungo Museum of Religious Life and Art in 1993

The location of the museum is on the site of a former shipyard within Glasgow Harbour, on the north bank of the River Clyde where it is met by the River Kelvin, facilitating the berth of the nearby tallship.

Here, you can get hands on with the interactive displays. Walk through Glasgow streets and visit the shops, bar and subway. Climb aboard a train, tram or bus and get a real feel for old public transport. Discover Glasgow's rich shipbuilding history, explore the car and motorbike walls and help put out a fire with the interactive fire engine.The Glenlee was built at the Bay Yard in Port Glasgow. In 1990 and two years later, the Clyde Maritime Trust succeeded in buying the re-named Galatea at auction for 5 million Pesetas (£40,000) and saved her from dereliction.

The Glenlee is one of only 5 Clydebuilt sailing ships that remain afloat in the world and she was restored over a six year period by the Clyde Maritime Trust’s paid and voluntary crew.

In November 1999, the Glenlee was recognised as part of the Core Collection of historic vessels in the UK. Chosen from a list of over 1,500 ships, the Glenlee is one of only 43 vessels recognised by the National Historic Ships Committee as being of pre-eminent national significance in terms of maritime heritage, historic associations or technological innovation. 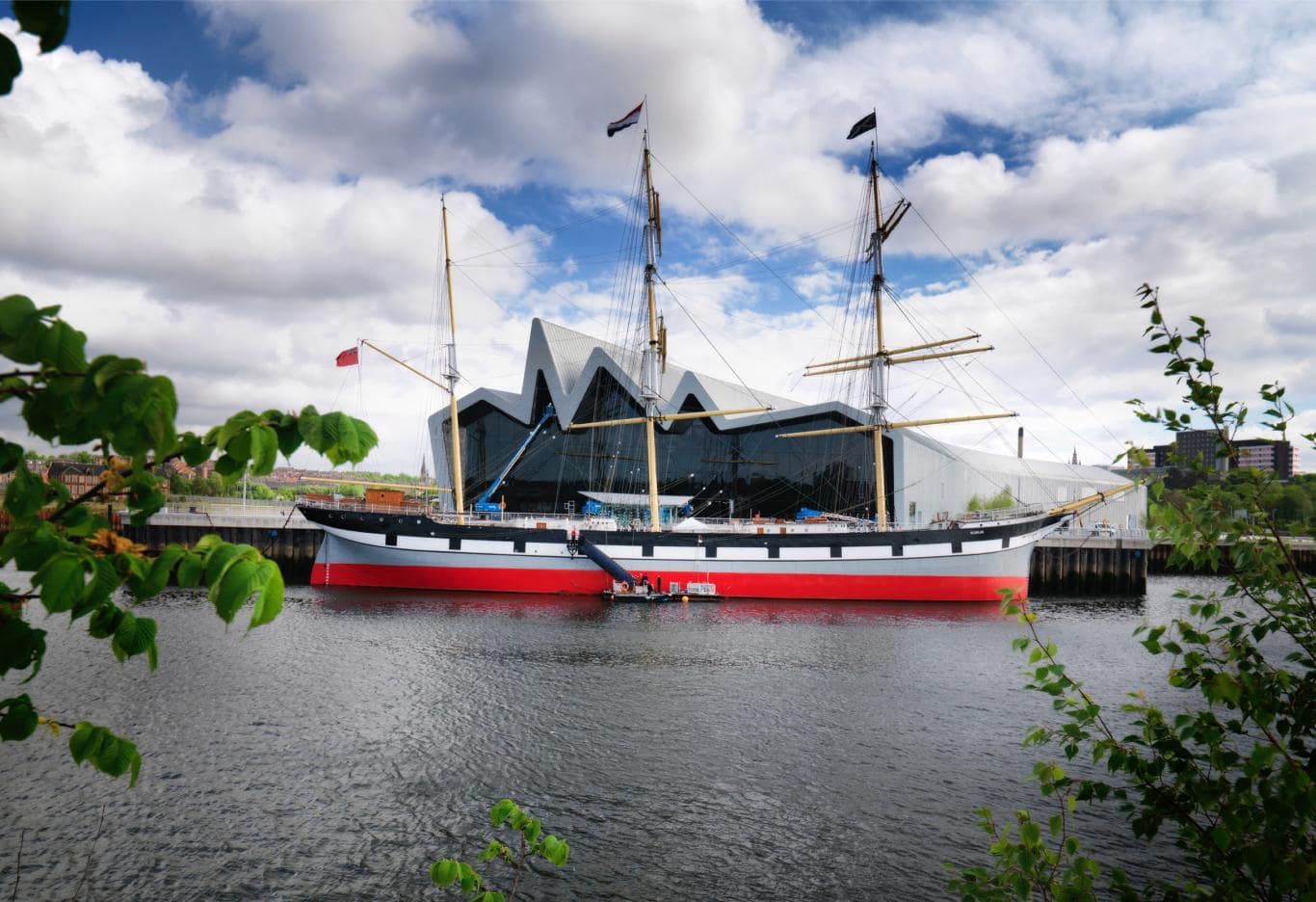 The Scottish Event Campus (SEC) is located in Finnieston on the north bank of the River Clyde and consists of 3 major entertainment venues in a single precinct.

The SEC Armadillo (while originally known as the Clyde Auditorium – I do share the local preference for “the Armadillo” ) is an auditorium located near the River Clyde,.

While the architects' inspiration for the design, was an interlocking series of ship's hulls in reference to Glasgow's shipbuilding heritage, by the time the venue was completed in 2000 it had already earned its affectionate nickname due to the similarity of its shape to that of the animal of the same name.

The building has become an iconic image of Glasgow.

The SSE Hydro is a multi-purpose indoor arena which was named after its main sponsor, an energy company. The arena was officially opened on 30 September 2013, with a concert by (now Sir) Rod Stewart.

During the 2014 Commonwealth Games the SSE Hydro was home to the netball and gymnastic events. In 2016 the 13,000 seat arena handled 751,487 ticket sales; making it the eighth-busiest music arena in the world in terms of ticket sales.

Together with the adjacent Armadillo, the SSE Hydro makes for spectacular photographs across the River Clyde, especially at night.

The SEC Centre is Scotland's largest exhibition centre and seats 15,000 people in its two concert halls. 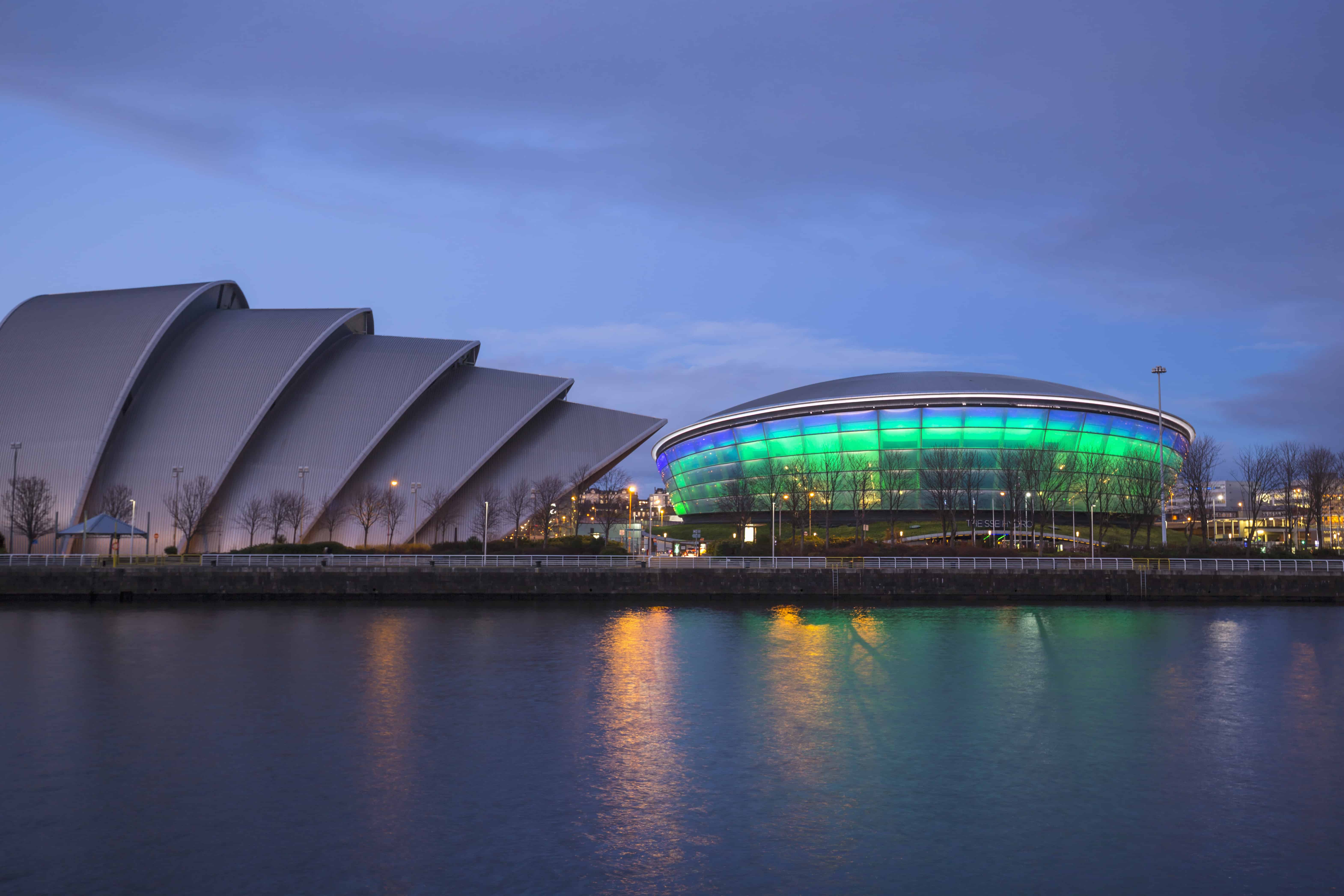 On the south side of the Clyde, accessed via Millennium Bridge opposite the SEC Centre, and adjacent to the BBC Scotland building lies the Glasgow Science Centre.

The GSC encourages immersion in science-oriented activities and also houses an IMAX cinema. It offers events tailored towards adults as well as a range of family-oriented ones, perfect for engaging future young scientists and engineers, for which Scotland has a proud reputation of producing (see Famous Scots).

The Finnieston Crane or Stobcross Crane is a disused giant cantilever crane located next to the River Clyde. It is no longer operational, but is retained as a symbol of the city's engineering heritage. The crane was used for loading cargo, in particular steam locomotives, onto ships to be exported around the world and is the last giant cantilever crane to be built on the Clyde

At the peak of Glasgow’s time as a major port and ship-building centre, the areas along the River Clyde to Finnieston were a hive of activity with many similar cranes loading and unloading goods to be sent around the world. Now that the city’s economy has become more service-oriented, the Finnieston Crane has been retained as a monument and proud reminder of the city’s history and evolution.

Continue walking along the riverside walk, and you will come to another city icon. 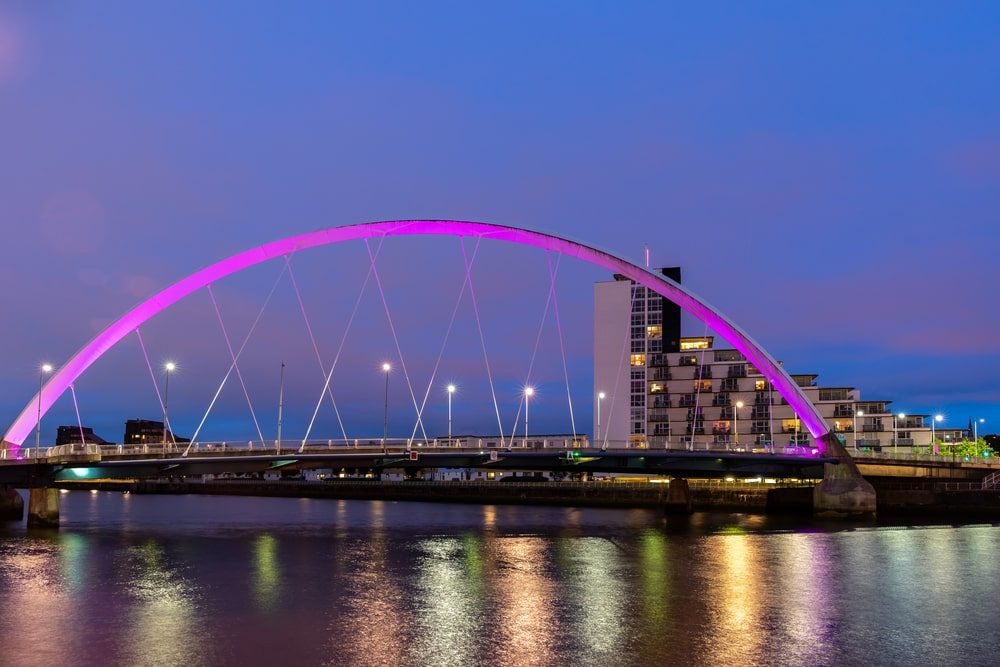 The Clyde Arc (known locally as Squinty Bridge), is a road bridge spanning the River Clyde in Glasgow, in west central Scotland, connecting Finnieston, near the Clyde Auditorium and SEC with Pacific Quay and Glasgow Science Centre in Govan.

A prominent feature of the bridge is its innovative curved design and the way that it crosses the river at an angle, as shown in the picture at right – a good example of the engineering expertise for which Glasgow has a well-earned reputation. The Arc is the first city centre traffic crossing over the river built since the Kingston Bridge was opened to traffic in 1969.

The bridge was named the "Clyde Arc" upon its official opening on 18 September 2006. It has been previously known as the "Finnieston Bridge" or the "Squinty Bridge".

Bus or walk to Finnieston Police Station (look for lunch) then walk to Mitchell library. From there train Charing Cross to George Sq, 100 bus, or walk to West Nile St (end) and turn right 2 blocks, then either head left 2 blocks to George Square or continue straight on to Central Station. 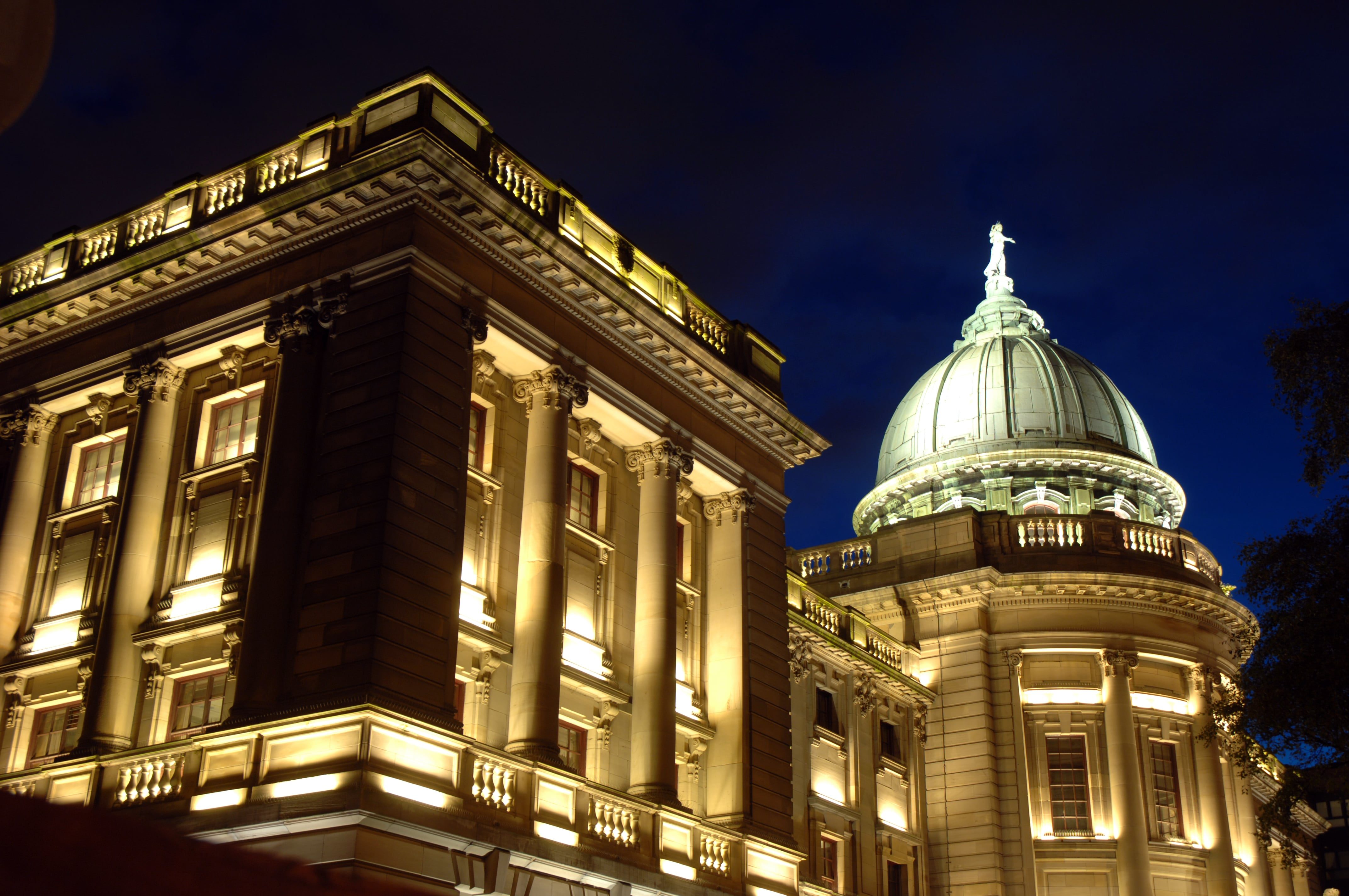 Glasgow's rich and fascinating history is safeguarded by public records (both written and pictorial) held in Archives of the Mitchell Library. Staff are very helpful in assisting folk navigate through the collections and archives, to explore the history of Glasgow and its people. It is both a lending library and a research library and historians and folk tracing their family tree will find it an invaluable resource.

The library, now based in the Charing Cross district, was initially established in Ingram Street in what is now Merchant City in 1877 following a bequest from Stephen Mitchell, a wealthy tobacco merchant, whose company later became one of the constituent members of the Imperial Tobacco Company.

New buildings with the ornate bronze domed roof were erected in North Street. A foundation stone was laid by industrialist and philanthropist Andrew Carnegie in September 1907.

The stunning exterior looks even more spectacular when floodlit at night.

Beware though. If you visit inside, the hours can very quickly disappear!

After a long day, it is time to head towards your accommodation to freshen up, then out for a meal before a well-earned rest.  Tomorrow we head into the east of the city to see its medieval roots.